The unique bobblehead set fits together at the base to form the shape of Wisconsin, making this a first bobblehead set that connects to form a state.

The limited-edition bobbleheads, which are each individually numbered to only 1,500, can be purchased online from the National Bobblehead Hall of Fame and Museum and BobblesGalore.

During the limited introductory period, the bobbleheads will be $175 for the set with free shipping. The set was produced by FOCO. 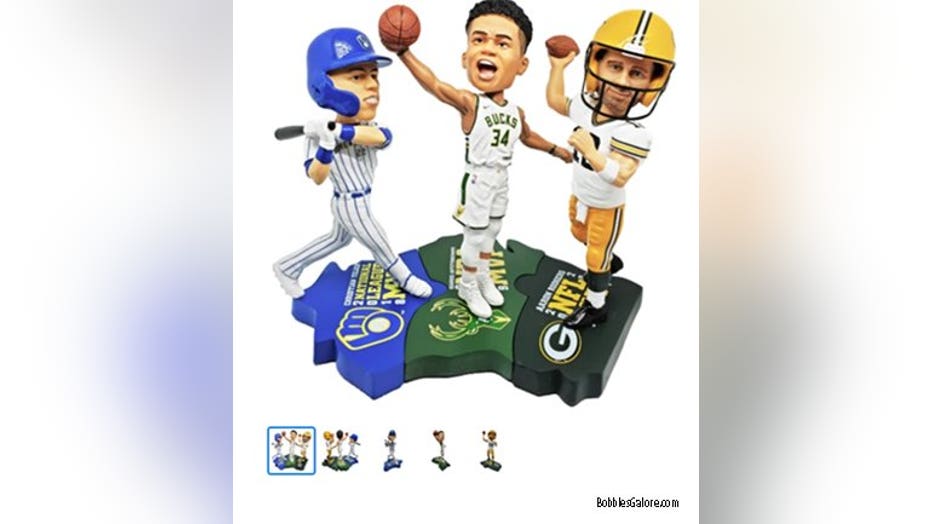 Earlier this year, fans realized that the jersey numbers for Rodgers (12) and Yelich (22) add up to 34, the number worn by Antetokounmpo, and graphics showing the simple match quickly went viral.

The bobbleheads feature an Augmented Reality (AR) component that enables fans to interact with each one as well as the set using the “AR Bobbles” app. The AR features can be activated by downloading AR Bobbles, an augmented reality app that is available on both the Apple App Store and Google Play.

By scanning the bobblehead with the app, the player’s statistics, video highlights, a shot chart, and an active news feed appear. AR Bobbles is a unique app that transforms formerly inanimate bobbleheads into something alive and interactive. It is poised to revolutionize the world of bobbleheads and has been exclusively developed for BobblesGalore. AR Bobbles can be adapted for any bobblehead and for use by professional sports teams.

"We were excited to team up with BobblesGalore and FOCO on this truly remarkable and unique bobblehead set featuring Wisconsin’s biggest stars and recent MVPs,” said Phil Sklar, Co-Founder and CEO of the National Bobblehead Hall of Fame and Museum in a news release. “These will be cherished collectibles for generations of Wisconsin sports fans and we expect them to sell quickly as they make the perfect holiday gift.”