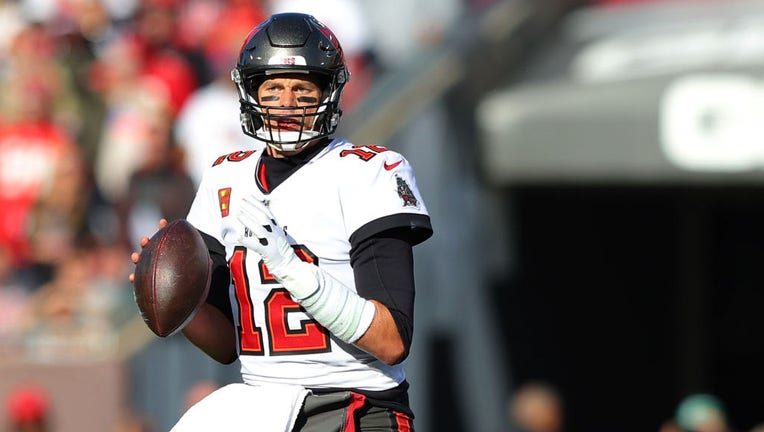 Tom Brady #12 of the Tampa Bay Buccaneers looks to throw the ball in a game against the Los Angeles Rams in the NFC Divisional Playoffs in 2022. (Photo by Kevin C. Cox/Getty Images)

WASHINGTON - Tom Brady is making the most of his retirement so far. After hanging up his cleats from the NFL, the seven-time Super Bowl champion is giving movies a shot.

The future Hall of Famer will play himself in the new film called "80 for Brady." The movie tells the story of four friends and New England Patriots fans who take a road trip to watch Brady and the Pats battle the Atlanta Falcons in Super Bowl LI in 2017. In that game, Brady led the Patriots to a historic comeback win over the Falcons to win New England’s fifth Super Bowl championship.

According to the Hollywood Reporter, Brady is also producing the film which features legendary actresses Lily Tomlin, Jane Fonda, Rita Moreno and Sally Field. The film will be directed by Kyle Marvin with production set for this spring.

ESPN reported that Brady launched 199 Productions, which will help make the new movie with Paramount Pictures and Endeavor Content.

Brady retired from the NFL after an illustrious 22-year career. He became the starter at Michigan in 1998 and led the team to two bowl wins during the course of his collegiate career. He was then drafted in the sixth round by the Patriots in 2000. Brady spent 20 seasons with the team — becoming the enduring face of the Patriots during a run that included nine Super Bowl appearances, six of those as a champion.

The All-Pro left the Pats to join the Tampa Bay Buccaneers in 2020 and led the team to a Super Bowl title in his first season there. The Bucs made it back to the playoffs this season but lost to the Los Angeles Rams, the eventual Super Bowl champions, in the NFC Divisional Playoffs.