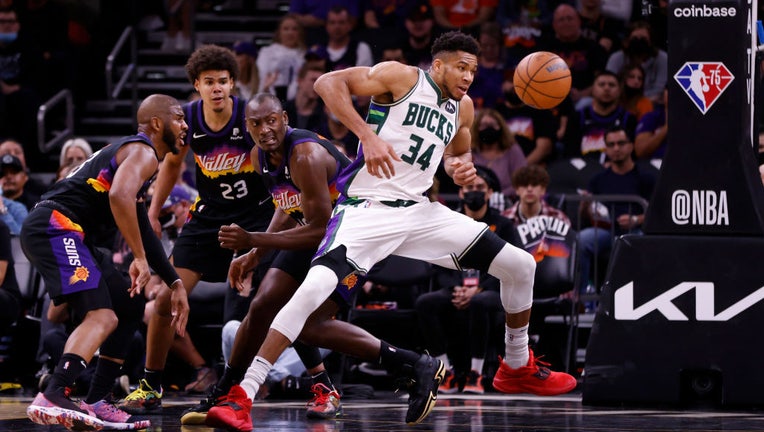 PHOENIX, ARIZONA - FEBRUARY 10: Giannis Antetokounmpo #34 of the Milwaukee Bucks loses the ball while being defended by Bismack Biyombo #18 of the Phoenix Suns during the first half at Footprint Center on February 10, 2022 in Phoenix, Arizona. NOTE T

PHOENIX - Cam Johnson eased past his defender and slammed home a pretty one-handed dunk, thrilling a sellout crowd and giving the Phoenix Suns a 20-point cushion heading into the fourth quarter of a 131-107 win over the Milwaukee Bucks.

Nothing changes the fact that the Bucks beat the Suns last year in the NBA Finals.

"They're the defending champs — we still hurt," Suns coach Monty Williams said. "But from a confidence standpoint, for sure, it was a big game for us. I can admit it now."

The game was tight throughout most of the first half but the Suns slowly pulled away in the third quarter, building a 97-77 advantage going into the fourth. Ayton had an efficient night, shooting 12 of 14 from the field on a variety of post moves and jumpers.

The Suns led by as many as 27 in the fourth and received a standing ovation from the home crowd in the final minutes when the starters checked out of the game.

Paul finished with his 500th career double-double. He's just the fourth guard in NBA history to accomplish that feat.

"I'm grateful that I still get a chance to play," Paul said. "And not just play, but I feel like I play at a high level every night. It's cool."

The Suns used a 12-4 run to end the second quarter and take a 64-56 lead into halftime. Ayton led Phoenix with 15 points before the break while Holiday had 17 points for the Bucks.

It was the first meeting between the teams since July 20, when the Bucks beat the Suns 105-98 in Milwaukee to win Game 6 and secure an NBA title. The Bucks won the final four games of the series.