CHICAGO — Sister Jean did just fine on the diamond, too.

The popular 98-year-old chaplain of the Loyola-Chicago basketball team that reached the Final Four switched sports Tuesday, throwing out a first ball before the Cubs' home opener.

Sister Jean Dolores Schmidt drew a big cheer at Wrigley Field when she made an underhand toss from her wheelchair. She laughed as the ball bounced toward home plate.

The nun wore a Cubs jacket and had a No. 18 Cubs jersey with Sister Jean written on it. She also talked with manager Joe Maddon before the Cubs' 8-5 loss to Pittsburgh. 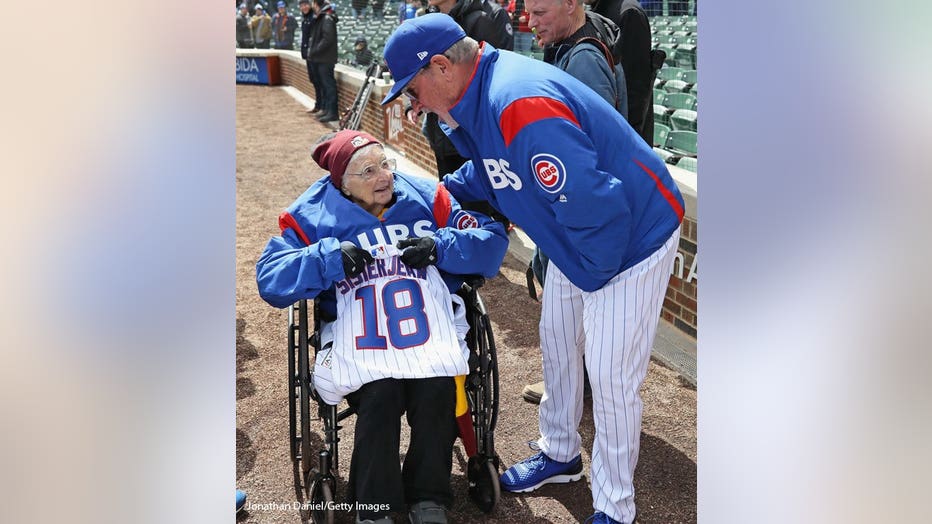 CHICAGO, IL - APRIL 10: Sister Jean Delores Schmidt of Loyola University talks with manager Joe Maddon #70 of the Chicago Cubs before the Opening Day home game between the Cubs and the Pittsburgh Pirates at Wrigley Field on April 10, 2018 in Chicago,

Loyola coach Porter Moser and some of his players were recognized on the field before the game. Senior guard Ben Richardson also threw out a ceremonial first pitch.

Moser and a couple of the Ramblers led the crowd in the singing of "Take Me Out To The Ball Game" during the seventh-inning stretch.