Inside Salto Gymnastics in Brookfield, you'll find little Asher Hall, training hard. He's got quite the skill set too. He'll tell you.

He's got quite the skill set, too. He'll tell you.

At just six-and-a-half years old, Asher is already a gold medalist, many times over.

In late March, he competed in the Junior Olympic Boys Gymnastics state meet in Franklin. He finished first in the individual all-around, high bar, parallel bars and rings. 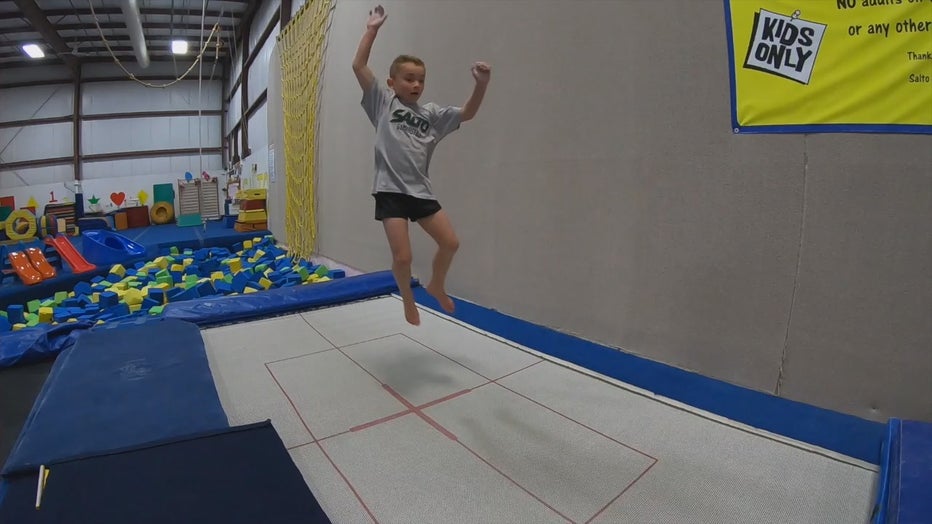 "It was amazing," said Anthony Ingrelli, Asher's coach at Salto Gymnastics Brookfield. "We started on high bar, and right after his score came out on high bar, I kind of knew that's going to be hard to beat. From there, he just kind of rolled right into it and had confidence the whole way."

The big stage of the state meet did not faze this seasoned kindergartner.

Believe it or not, he accomplished all of this in just one year in the sport.

"Just a very proud moment," said Scott Hall, Asher's father. "We had no expectations coming into gymnastics or the season. We didn't know if he was going to be the best or the worst or somewhere in the middle, and we just told him to go out there and have some fun. Do your best. He did, and he performed really well."

Asher's dad, Scott, could tell early on that gymnastics would come naturally to his son.

"When he was four, he was watching some Olympics on TV, and he turned to me and my wife and said, ‘I can do those things,’" said Hall. "Specifically, he was looking at the back handspring, and we thought to ourselves, 'I don't know if you can do that.' I went to work, I came home and the next day, he had taught himself how to do a back handspring, and that's when we decided, we should probably get him involved in gymnastics."

From there, it was all about honing his skills. Asher trained with his coach, Anthony Ingrelli, at Salto twice a week and continued to improve.

While Asher can do a lot of events, he's got a favorite.

It's no secret this pint-sized gymnast loves to compete. So far, he's compiled around 35 medals, which his parents display in their basement.

"It's amazing," said Hall. "I mean, we tell our friends, and it's still kind of surreal that he was able to do that at such a high level at such a young age. We're just very proud and just want to see what his future holds."

After his success with gymnastics, Asher will look forward to a new challenge this year: American Ninja Warrior-style gyms and courses.