ARLINGTON, Texas -- Aaron Rodgers had more magic in store for the Dallas Cowboys, who can't seem to find the mojo that carried them a year ago.

Rodgers threw a 12-yard touchdown pass to Davante Adams with 11 seconds remaining, lifting the Packers over Dallas 35-31 on Sunday in another thriller nine months after their divisional playoff win on the same field.

Rodgers capped a 75-yard drive in just 1:02, going toward the same end zone as in the playoff game. In that game, Rodgers' long completion to Jared Cook on third-and-20 in the final seconds set up Mason Crosby's winning field goal as time expired in a 34-31 win. 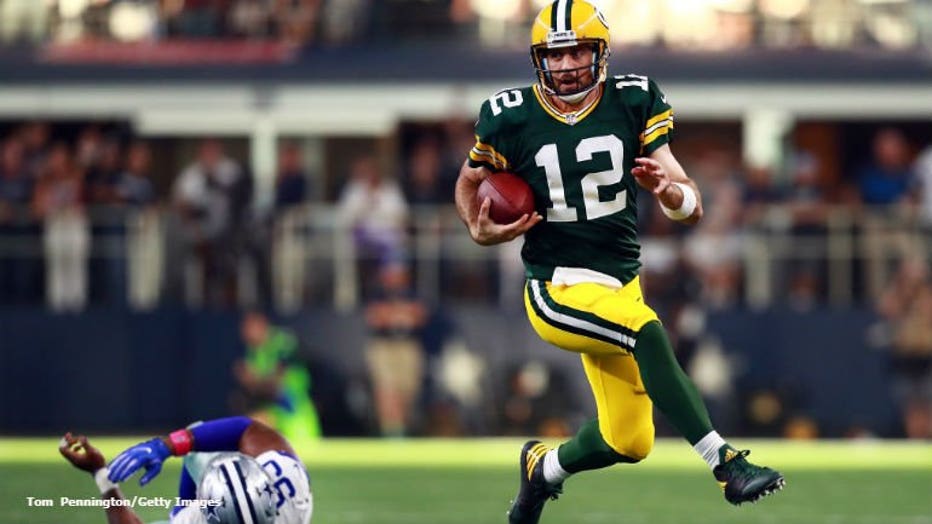 ARLINGTON, TX - OCTOBER 08: Aaron Rodgers #12 of the Green Bay Packers scrambles with the ball against David Irving #95 of the Dallas Cowboys in the fourth quarter at AT&T Stadium on October 8, 2017 in Arlington, Texas. (Photo by Tom Pennington/G

"It comes down to little things being executed perfectly," Rodgers said after the Packers' seventh win in eight games in the series. "It was important plays at the most important times by those guys."

Adams had been in the concussion protocol but was active 10 days after leaving the field on a stretcher on a helmet-to-helmet hit that resulted in a suspension for Chicago linebacker Danny Trevathan. He had seven catches for 66 yards and two touchdowns.

Dak Prescott, who had touchdown passes on Dallas' first three drives, put the Cowboys in front on an 11-yard touchdown run with 1:13 remaining to cap a 17-play drive that lasted almost nine minutes. 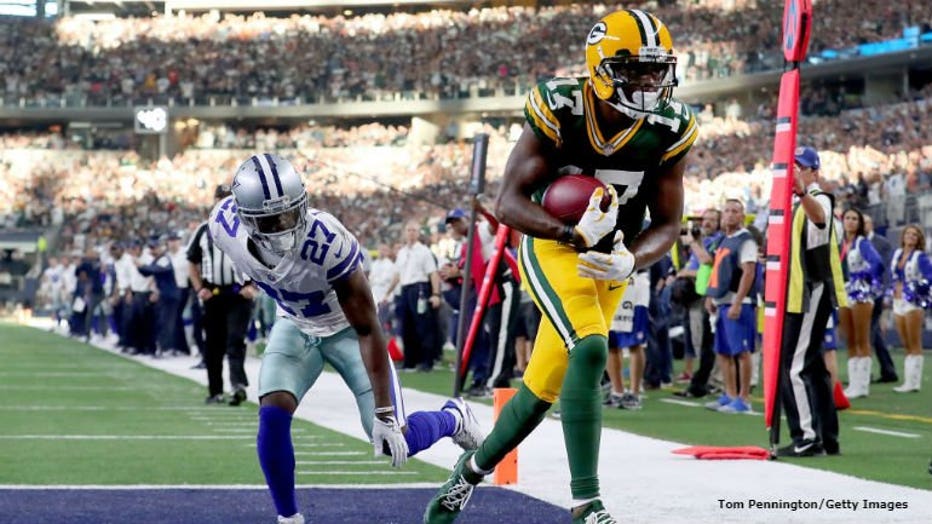 ARLINGTON, TX - OCTOBER 08: Davante Adams #17 of the Green Bay Packers pulls in the game winning touchdown against Jourdan Lewis #27 of the Dallas Cowboys in the fourth quarter at AT&T Stadium on October 8, 2017 in Arlington, Texas. The Green Bay 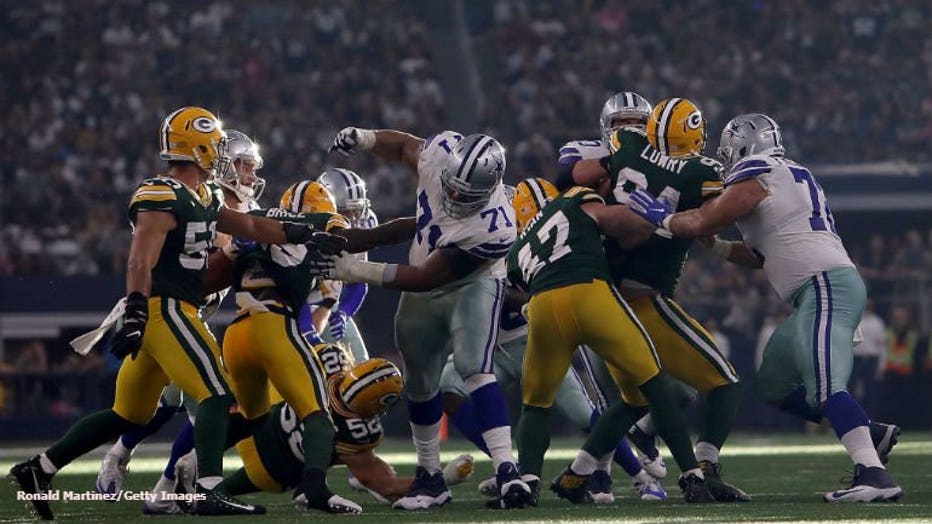 But another defensive letdown, just like a year ago in the postseason, left Dallas (2-3) already with the same number of losses from the magical rookie season when Prescott and running back Ezekiel Elliott led the Cowboys to the No. 1 seed in the NFC.

The Packers (4-1) had gone ahead earlier on Damarius Randall's 21-yard interception return for a touchdown, the third of five lead changes in the fourth quarter. Green Bay rallied from 15 points down in the first half after letting a 21-3 lead get away in last season's playoff win.

Aaron Jones became the first Green Bay running back with 100 yards in his first start as a rookie since Samkon Gado in 2005. He had 19 carries for 125 yards and a touchdown. He replaced Ty Montgomery, out after breaking some ribs in the win over the Bears.

"He earned the opportunity to start today, and he produced," coach Mike McCarthy said.

Elliott ended a three-game drought without 100 yards, matching the longest from his rookie season, finishing with 116 yards on 29 carries.

Rodgers was 19 of 29 for 221 yards and three touchdowns, and set up the winning score with an 18-yard scramble. After an incompletion to Adams working against rookie Jourdan Lewis, Rodgers went there again. Rodgers made the grab as Lewis turned too late.

"I was going to call a different play, but (Adams) said to call it again," Rodgers said. "With his eyes, he said, 'Throw a better ball.'" 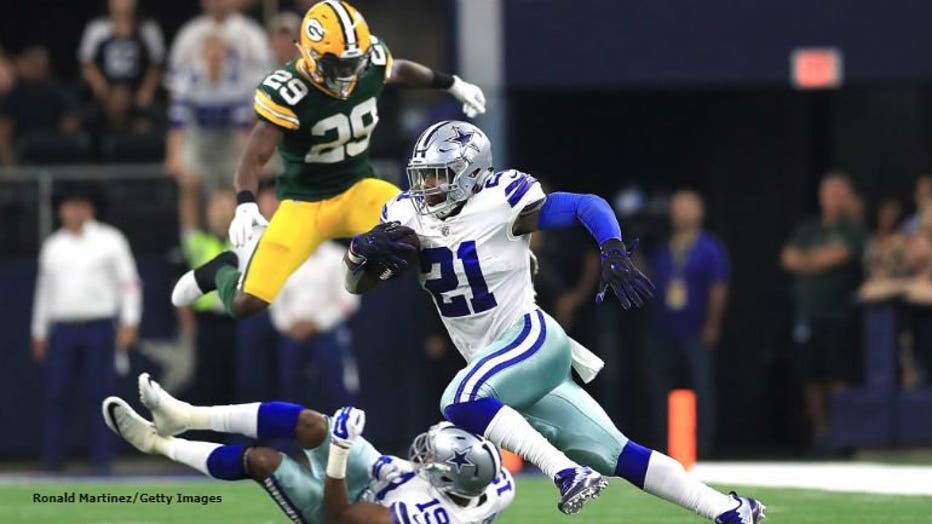 ARLINGTON, TX - OCTOBER 08: Ezekiel Elliott #21 of the Dallas Cowboys runs the ball in the fourth quarter against the Green Bay Packers at AT&T Stadium on October 8, 2017 in Arlington, Texas. (Photo by Ronald Martinez/Getty Images)

Prescott looked the part of Rodgers, scrambling to set up big completions and running 21 yards himself on one play to help the Cowboys build a 21-6 lead.

He was 25 of 36 for 251 yards and three first-half touchdowns, two to Cole Beasley and one to Dez Bryant, who joined Hall of Famer Bob Hayes as the only Dallas receivers with at least 70 TD grabs.

"It's a tough one," Prescott said. "You're frustrated. We knew how important it was for us to get this win and try to go into this bye week 3-2 and now on the flip side it's just about staying focused, a lot of football left to play."

Before Prescott's TD run for a 31-28 lead, there were consecutive challenges from each coach over a first down. A catch by Beasley was ruled a first down and reversed, as was Elliott's fourth-down plunge when he was ruled short but replay showed the ball reaching Green Bay's 19-yard line. Officials then measured the first down, and the Cowboys got it by half a football.

DE David Irving returned from a four-game suspension for Dallas with two sacks. He had a sack and three forced fumbles with a recovery in last year's 30-16 win in Green Bay during the regular season.

Crosby missed his first two PATS, the first time in his 11-year career to miss more than one in a game. The first clanged off the left upright in the first quarter, and the second was wide left in the second quarter. He made all 36 kicks in 2015, the first year of the longer distance, but missed three last season.

Packers: WR Jordy Nelson, who scored his sixth touchdown for the first Packers lead early in the fourth quarter, wasn't on the field during the final drive. Coach Mike McCarthy said he was being evaluated for an undisclosed injury. ... Rookie CB Kevin King left with a concussion in the first half.

Cowboys: Bye, then at San Francisco on Oct. 22.