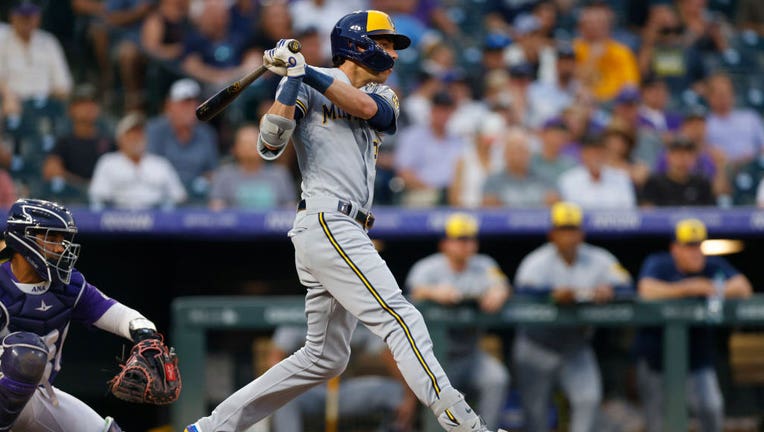 DENVER, CO - SEPTEMBER 6: Christian Yelich #22 of the Milwaukee Brewers hits a single in the third inning against the Colorado Rockies at Coors Field on September 6, 2022 in Denver, Colorado. (Photo by Justin Edmonds/Getty Images)

DENVER - Christian Yelich led off the game with a 499-foot homer for Milwaukee, but Randal Grichuk connected twice for the Colorado Rockies, including a three-run drive in the 10th inning to beat the Brewers 10-7 Tuesday night.

The Brewers are now 2 1/2 games behind San Diego for the final NL wild-card spot.

Yelich gave Milwaukee a great start, launching a drive into the third deck at Coors Field. It was the third-longest home run since Statcast started tracking homers in 2015 — Texas’ Nomar Mazara hit a 505-foot shot in 2019 and Miami’s Giancarlo Stanton hit a 504-footer at Colorado in 2016.

Grichuk hit a solo homer that capped a five-run rally in the eighth that made it 6-all. His second home run of the game, and 15th of the season, came off Taylor Rogers (3-7).

Grichuk is the first player in franchise history to hit a tying home run in the eighth inning or later, and then hit a walk-off homer in the same game, according to the Rockies. He is the first major league player to do it since Trey Mancini on June 7, 2017, for Baltimore.

He looked into the Rockies dugout as he trotted to first to see his teammates celebrating following his game-winning blast.

"I think that’s the first ball that I’ve ever hit that I’ve looked at our dugout and showed some emotion and didn’t just run out of the box," Grichuk said. "To hit a game tying homer and then the game-winning homer, it’s pretty special."

Willy Adames had three hits for Milwaukee, including an RBI double in the 10th inning to drive in Yelich for a 7-6 lead.

Yonathan Daza, who had a three-run homer in the eighth, hit an RBI double in the Colorado 10th that tied it. After an intentional walk and a groundout, Grichuk homered to win it.

The Brewers built a 6-1 lead behind seven strong innings from starter Brandon Woodruff but the Rockies tied the game in the eighth of Luis Perdomo and Peter Strzelecki.

Alan Trejo, who had three hits, had an RBI single in the Rockies eighth that made it 6-2. Daza homered and Grichuk connected with two outs to make it 6-all.

Yelich’s 12th home run put Milwaukee ahead and Hunter Renfroe’s 25th of the year three batters later made it 3-0. A two-run double by Omar Narváez in the fourth to give the Brewers a 5-1 lead and Adames padded the lead with an RBI double in the seventh.

"That was a bomb," Grichuk said of Yelich’s homer. "I honestly wouldn’t even be surprised if it was further than 499. That was impressive."

Elehuris Montero hit a solo homer in the third inning for Colorado’s lone run against Woodruff, who matched his longest outing of the season. He allowed just two hits and struck out five.

"He looked really good tonight," Grichuk said of Montero. "He was the only one that really looked good off of their starter. It’s impressive seeing these young guys come up and do what they’re doing. Poised and having good at bats. They definitely look a heck of a lot better than I did when I first came up."