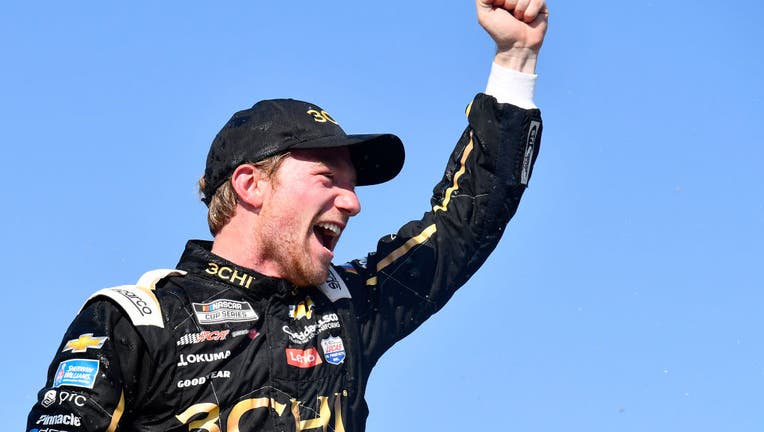 The circumstances of his triumph made it worth the wait.

Reddick won Sunday at Road America by outdueling Chase Elliott, the defending champion on the course and the current points leader. The victory came in the 92nd start of his Cup career, which has included five second-place finishes.

"It was just a huge sense of relief," Reddick said.

The Richard Childress Racing driver won by 3.304 seconds over Elliott, who had the pole position and led for 36 of the 62 laps. Elliott was seeking his eighth career Cup road-course win to tie Tony Stewart for second place — one behind Jeff Gordon’s record.

"He’s been the guy that’s won more road courses the last couple of years than anybody," Reddick said.

Elliott and Reddick were both well ahead of the field before making pit stops with about 20 laps remaining. Elliott had a narrow lead over Reddick as they came out of the pits, but Reddick eventually pulled ahead of him as they headed back toward the front of the pack.

Reddick took over the lead for good on the 47th lap once all the cars that had been ahead of him made their pit stops.

Elliott had the pole position and led for much of the day as he attempted to follow his victory last week at Nashville with another. He was chasing his third win of the season.

Nobody has won more than two races through the first 18 events, the first time there hasn't been at least a three-time winner this late in the season.

Instead, Reddick became the fifth first-time winner this year.

Each of the first three road-course races this year has had a first-time winner, with Reddick breaking through at Road America after Chastain won at the Circuit of the Americas and Suárez at Sonoma.

The other first-time winners were Austin Cindric at Daytona and Chase Briscoe at Phoenix.

Reddick, who won the Xfinity Series in 2018 and 2019, seemed on the verge of getting his elusive first victory a number of times before Sunday.

Perhaps the most notable example came at Bristol in April. Reddick and Chase Briscoe were dueling for the lead that night when the two cars spun out of control, enabling Kyle Busch to slip past them for the victory. Reddick also led for 90 laps at Fontana earlier this year but ended up 24th after William Byron ran him into wall.

"This year’s been one mistake away from greatness all year long," Reddick said. "We finally did it today."

Team owner Richard Childress sensed the breakthrough was coming and made that clear during a Sunday morning pep talk with the driver.

"I told him this morning, ‘You're going to win this race. We just can't beat ourselves and (have to) be solid,' " Childress said.

Reddick made sure his boss' prediction came true.