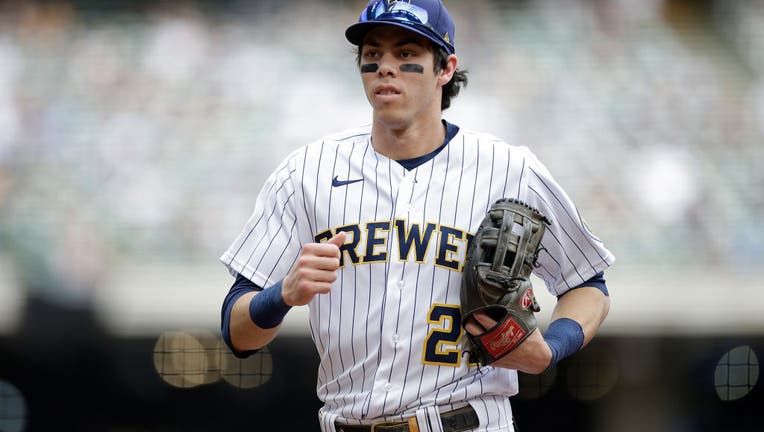 MILWAUKEE, WISCONSIN - SEPTEMBER 26: Christian Yelich #22 of the Milwaukee Brewers runs off the field against the New York Mets at American Family Field on September 26, 2021 in Milwaukee, Wisconsin. Brewers defeated the Mets 8-4. (Photo by John Fish

MILWAUKEE - If the first two days are any indication, this is going to be quite a postseason.

Four of baseball's most storied franchises played in the wild-card games, with the Red Sox beating the Yankees and then the Dodgers eliminating the Cardinals on Chris Taylor's ninth-inning homer. Now, Los Angeles moves on to face San Francisco in the latest chapter of another famous rivalry — and the most anticipated matchup of the Division Series round.

Now is also a good time to look ahead a bit. With four teams left in each league, there are 16 possible World Series matchups remaining. Here’s a quick glance at each one. The matchups are listed in descending order of likelihood, using probability figures from Fangraphs.com early Thursday morning.

A rematch of the 2018 World Series won by Boston — except now Mookie Betts is playing for Los Angeles. Alex Verdugo went to the Red Sox in that trade, and they also have ex-Dodgers Nathan Eovaldi and Kiké Hernández playing significant roles.

No need for any deep digging on this matchup. When Houston’s sign-stealing scheme came to light, Dodgers fans were among the most aggrieved, since they lost to the Astros in the 2017 World Series. Former Dodgers star Dusty Baker now manages Houston.

There might be more familiarity and hostility in a Dodgers-Astros or Dodgers-Red Sox matchup, but there’s a lot to recommend Dodgers-White Sox. For one thing, it would give Chicago manager Tony La Russa a World Series rematch with Los Angeles after he was on the wrong end of Kirk Gibson’s famous home run in 1988, when the Dodgers beat Oakland. This could also be the best starting pitching matchup of the remaining possibilities.

Milwaukee and Boston used to share a division in the AL East, but the teams don’t have much of a memorable history with each other. The Brewers finished two games behind the division champion Red Sox in 1988, but even that wasn’t really a head-to-head race. The top four AL East teams finished within two games of each other that year.

Zack Greinke pitching against his former team in Milwaukee would be an interesting subplot here. Also, Brewers president David Stearns was once an assistant general manager for the Astros.

The travel would be a breeze between two ballparks about 100 miles apart. Avisaíl García, a former White Sox outfielder, hit 29 homers this year for Milwaukee. Switch-hitting catcher Yasmani Grandal spent a year with the Brewers before joining the White Sox after the 2019 season.

The Braves face the city they once called home, and they’ll hope this goes better for Atlanta than its matchup with the Boston area in the 2017 Super Bowl. Be ready for some "28-3" signs at Fenway Park.

In 2017, Charlie Morton got the win in Game 7 of the World Series for the Astros. He went 14-6 for Atlanta this season.

Craig Kimbrel vs. the Braves — although Kimbrel has struggled so much for Chicago it’s hard to say how important he’ll be in the postseason.

Boston has the most World Series titles this century with four, and San Francisco is second with three. These teams have generally stayed out of each other's way over the past couple decades. The Giants didn’t make the playoffs in any of the four years the Red Sox won it all, and the Red Sox didn’t make it in the three seasons the Giants took the title.

This storyline is easy: Baker goes up against San Francisco, the team he began his managerial career with in 1993. Baker took the Giants to a World Series in 2002 — still his only pennant as a big league skipper — but they lost to the Angels in seven games that year.

The Giants were the New York Giants back in 1917, when the White Sox beat them in the World Series behind Red Faber’s three victories. Chicago did not win it all again for 88 years.

These are the only two teams in the postseason this year that have never won the World Series. Tampa Bay traded shortstop Willy Adames to the Brewers in May. Star rookie Wander Franco has excelled in that spot for the Rays, but Adames hit 20 homers in 99 games after joining Milwaukee.

The World Series goes to SEC country. These two teams were one game away from meeting in last year’s Fall Classic, but Atlanta lost to the Dodgers in a seven-game NL Championship Series.

Yes, that's correct: The Fangraphs numbers say this matchup between the two top seeds is actually the least likely. Evan Longoria is one of the top players in Tampa Bay's young history, but after 10 seasons there he was traded to the Giants. He's been with San Francisco for four seasons and still has good power when healthy.

Milwaukee's Royal Heat Dance Team made it safely to and from a competition in Greenville, South Carolina over the weekend.

Braden Rumpit has a cool, if fairly typical diving backstory. It started as a kid. He competed in club and high school, winning the state championship in 2019 and landed a spot on the Badgers squad.