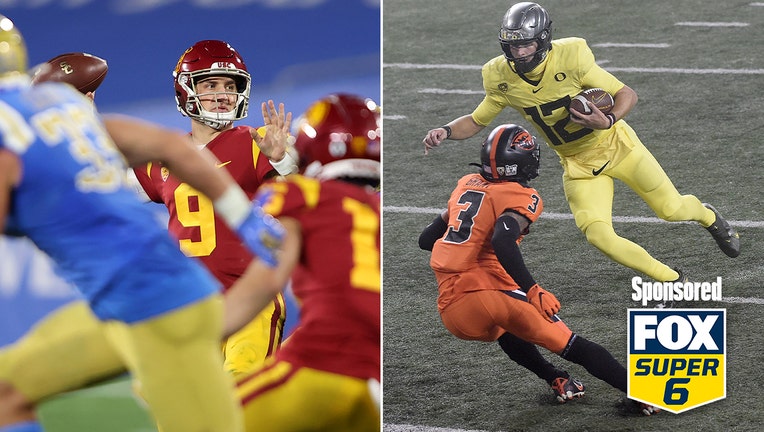 LEFT: Kedon Slovis #9 of the USC Trojans passes the ball during the second half of a game against the UCLA Bruins at the Rose Bowl on December 12, 2020 in Pasadena, California. (Photo by Sean M. Haffey/Getty Images) RIGHT: Quarterback Tyler Shough #1

In this different type of college football season, the PAC-12 is about to embark in a vastly different looking championship game.

Instead of playing at Allegiant Stadium in Las Vegas- the scheduled host locale- it will be the played under the stately flame of the Los Angeles Memorial Coliseum. And instead of having the two teams that lead the North and South divisions of the PAC-12, it will be South champion USC hosting the North’s No. 2 finisher Oregon, who was bumped into this spot when Washington’s COVID-19 issues forced them to back out on Monday afternoon.

Nevertheless, a championship will be on the line and the Trojans could cap off a perfect – albeit abbreviated- conference season and lock in its bid to a New Year’s Six bowl with a victory Friday night (8 p.m. ET, FOX).

And being able to predict the big events of this game could help you win $25,000 in FOX’s Super 6 contest.  Just download the free app, answer six questions correctly and you could win up to $25,000 while watching football. It’s that simple.  Here’s the questions and some potential tips on the results.

Both the Ducks and the Trojans have been able to post a ton of points on the scoreboard thanks in large part to high powered offenses. Oregon has been a better first half team recently, scoring at will early but struggling to put games away late against Oregon State and California in its final two contests. USC needed a second half surge to edge UCLA last week.  All in all, the mid-20s could be a solid place.

If you want a sign of the depth that USC carries, consider that it has eight different players who have recorded touchdowns this season- and none of them cross-pollinate (score rushing and receiving touchdowns.) Meanwhile, Oregon has five different rushers who have gotten into the end zone. In other words, both teams have multiple ways of causing damage.

What will be the highest scoring quarter?
1st, 2nd, 3rd, 4th or Tie

If you believe that championship games have a rhythm that takes some settling into, the second quarter may be the best play of all. Especially since the Ducks have again shown how much better they’ve been in the first half over recent weeks.

This is where Kedon Clovis and the Trojans have a huge advantage. USC can go deep with its wideouts, especially Drake London, Amon-Ra St. Brown and Tyler Vaughns. Combined, those three have 93 catches and 1,253 yards with 12 touchdowns.  Oregon’s Tyler Shough doesn’t have those type of elite catchers at the top of his receiving core. On paper, the Trojans have the advantage.advantage

Oregon is averaging 189 yards per game on the ground, thanks to Travis Dye and CJ Verdell, who have both carried the load this season. Because Clovis and the Trojans have so  many weapons among their receivers, the running game is not nearly a priority.

It would fit the weirdness of the PAC-12’s season if Oregon could come to the Coliseum and spoil USC’s path to the New Year’s Six and a likely Fiesta Bowl trip. But nothing about the Ducks performance against Oregon State and California gives enormous confidence that Oregon- who hasn’t played in 13 days- can overcome USC’s offensive weapons. Again, weird things have highlighted 2020 in the PAC-12 though. So this could be a proper finish.