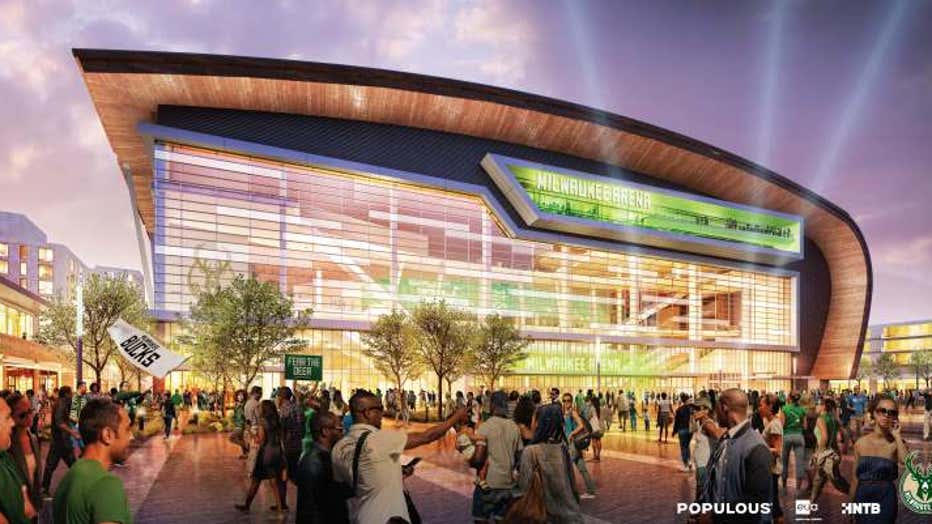 The primary entrance to the arena faces a new Fourth Street public plaza and future entertainment block. A glass curtain wall maximizes transparency on the east facade to reveal a full-height atrium within. Dramatic escalators and monumental stairs c

According the Bucks website, "These images reflect the plans submitted for the final stage of the design approval process with the city and local public officials before construction on the new arena can begin this summer." 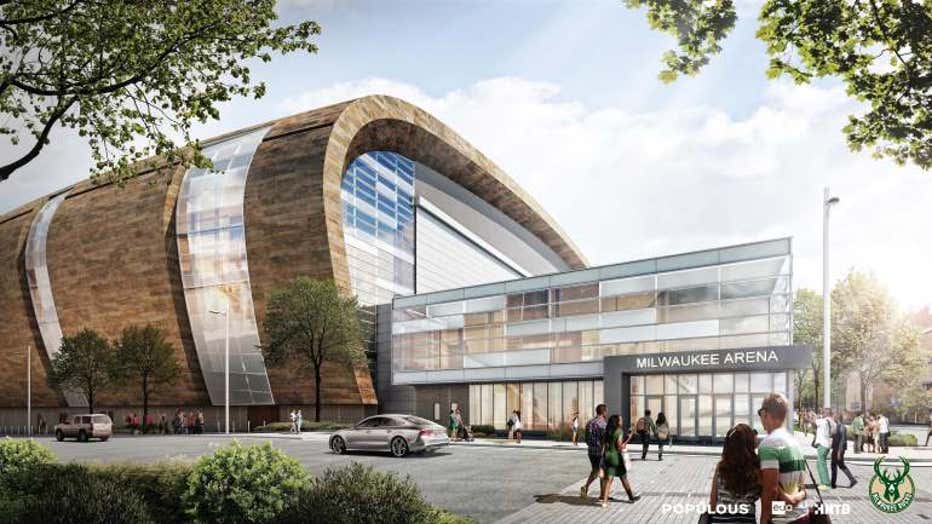 A transparent entrance lobby welcomes Bucks fans from the north and west of the arena. This public entrance utilizes similar detailing and composition to the primary entry from 4th Street, but brought down in scale to meet the street and surrounding

The images of the new six-story multi-purpose venue and entertainment district illustrate the ambitious new development vision of Bucks ownership to transform 30-acres of mostly vacant land into a vibrant neighborhood activated by sports, entertainment, residential and office uses. The arena site, located between N. Fourth Street and N. Sixth Street from W. Highland Ave. to W. Juneau Ave., will seamlessly link with active development on all sides, including Old World Third Street, Schlitz Park, The Brewery, the Milwaukee riverfront, Water Street and the Wisconsin Center. 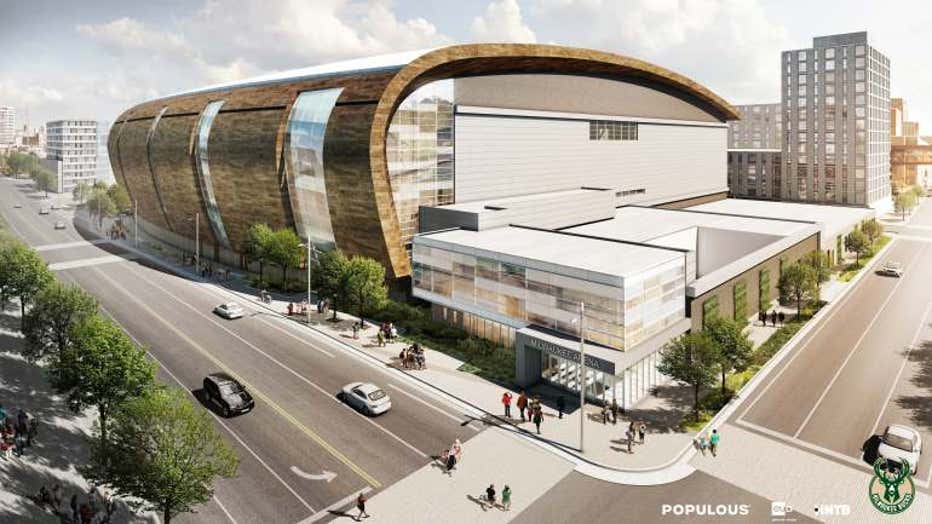 The western approach from Juneau presents another marquee view of the crafted curves of the north façade. The depth of the zinc returns surrounding the glass ribbons come into view, adding another layer of depth to the overall form of the façade. Cir

The exterior design for the new arena is inspired by Milwaukee’s proud architectural heritage and bold outlook, coupled with the region’s natural environment of rivers, lakes and forests. The hand-crafted zinc patina exterior, punctuated by nodes of glass to highlight activity within, will create an iconic architectural image that will anchor the surrounding development. 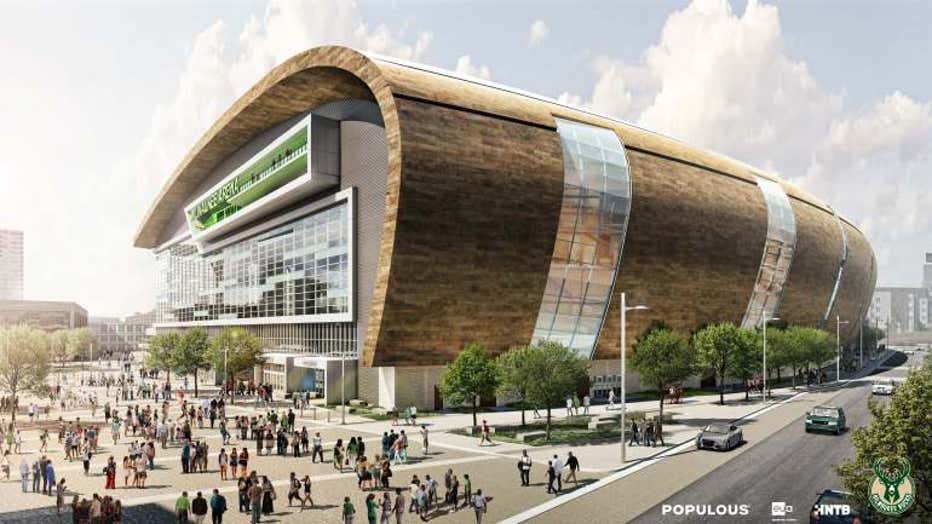 The Juneau Avenue frontage offers a particularly dynamic view of the arena as the extension of the arced long-span roof seamlessly transitions to vertical wall between Fourth and Sixth Streets. Curved in both floor plan and vertical section, and clad

The 714,000 square foot arena will be home to Milwaukee Bucks basketball and countless sports and entertainment events. The arena design features an intimate bowl optimized for basketball viewing with the majority of the seats in the lower level closer to the action, while still providing the flexibility to host hockey games, end stage and center stage concerts, family shows, circuses and ice events, as well as open-floor exhibitions. Both the upper and lower levels will load from the top down, creating a more efficient seating pattern free of breaks. The design caters to the next generation of fans, featuring open and transparent concourses, additional social spaces within view of the action, and a variety of experiential and premium seating options. Additional operational efficiencies include vastly improved load-in/load-out capabilities that will allow the facility to accommodate a wider variety of concerts and shows. 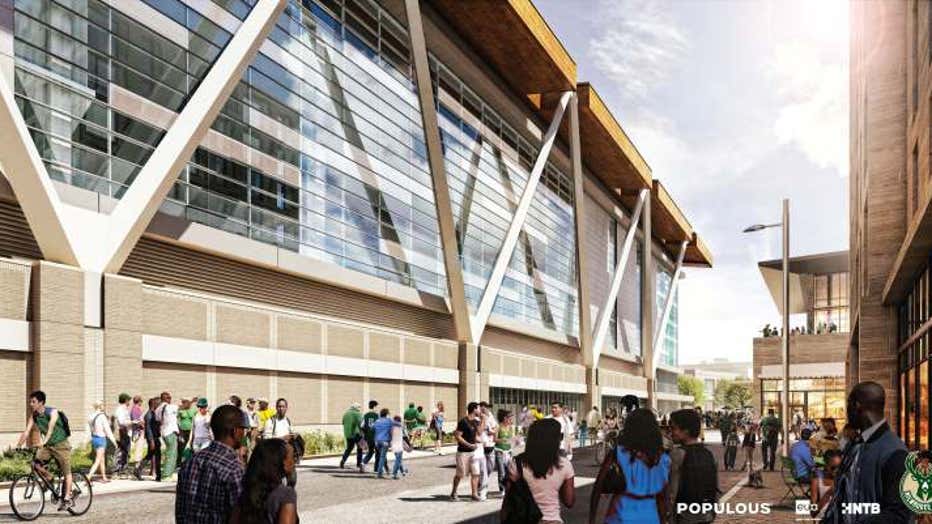 Highland Avenue will provide important pedestrian linkage from the west. The arena design incorporates an articulated brick base which is punctuated by glazing for arena administrative offices, an employee entrance and the multi-story flagship Bucks

The Bucks tapped Populous last year to lead a group of prominent global, national and local architects including Wisconsin-based firms Eppstein Uhen and HNTB for the new arena and master plan of the entire development. 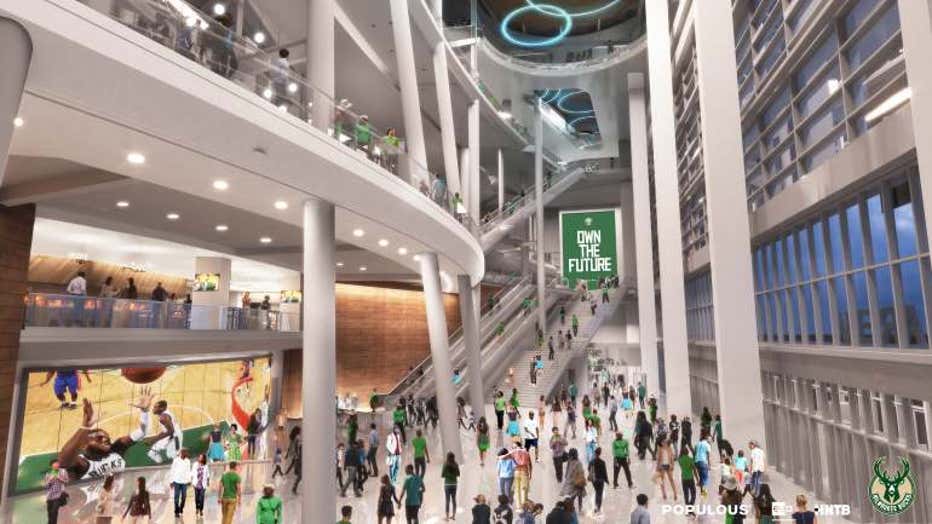 As befits the main arena entry, the monumental east atrium soars almost 100 vertical feet, connecting every level of the arena from Ground/Event Level to the uppermost Panorama Level perched above the upper seating tier. The atrium is activated at ev 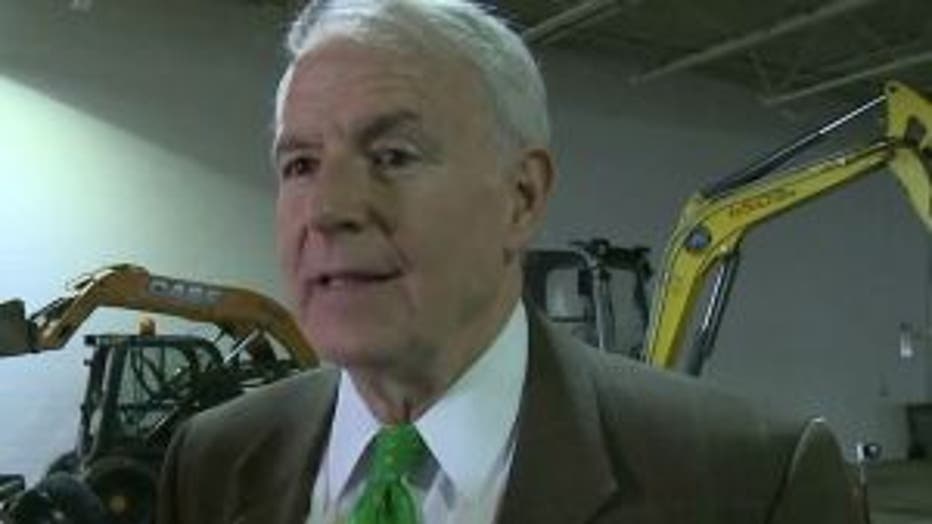 "I like it. I think it adds a lot of electricity, if you will, as to what's going on in that part of downtown," Milwaukee Mayor Tom Barrett said.

"We're going to get this building started this summer, they say, and once they put a shovel in the ground I will rest easy that the team is going to stay here for generations to come," Herb Kohl, former Bucks owner said. 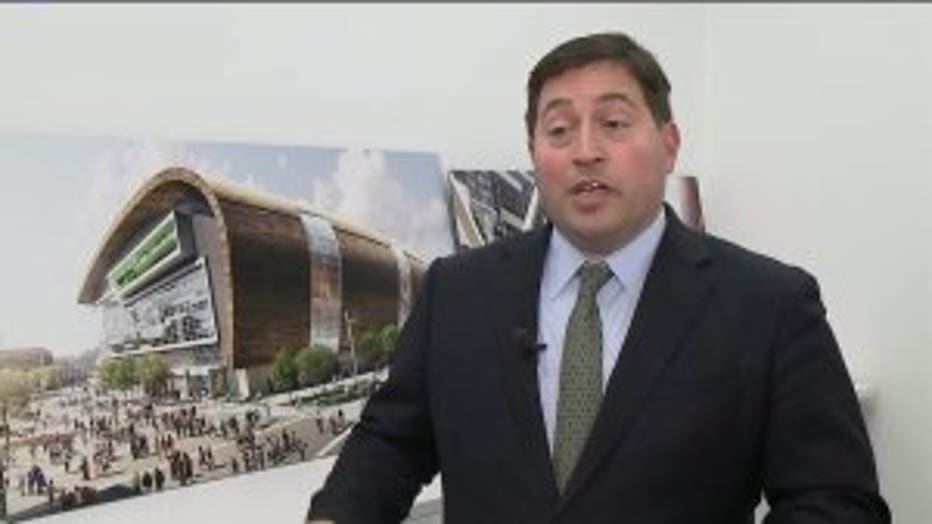 In a statement, Bucks President Peter Feigin said the following:

"We’re just months away from seeing the new home of the Milwaukee Bucks and our collective efforts to revitalize Milwaukee begin to move from vision to reality. These plans reflect the commitment of our ownership, generosity of Senator Kohl and historic collaboration with public officials to build a world-class sports and entertainment destination in the heart of downtown Milwaukee. We look forward to working closely with public officials and the entire community over the next several months to finalize the design and construction plans so that we can begin to create long-lasting jobs and economic opportunity in Milwaukee." 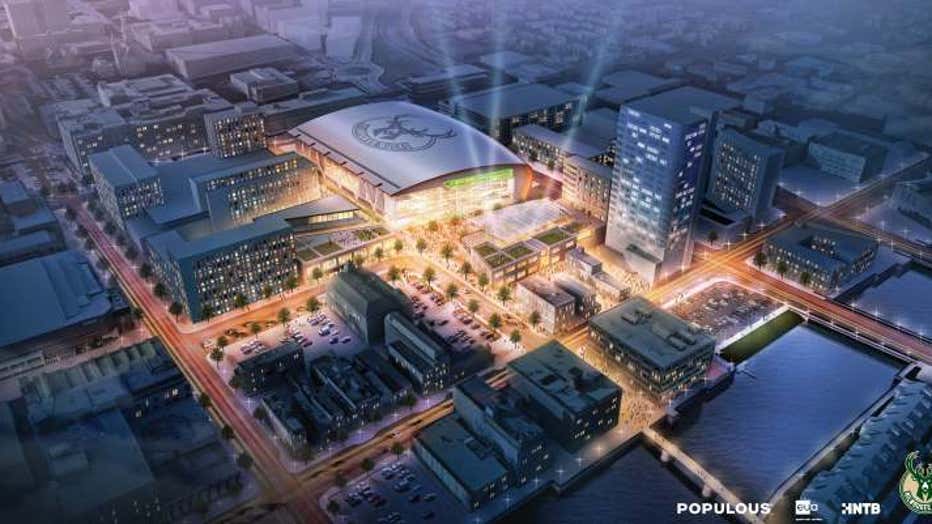 Brad Clark, senior principal at Populous said the following in a statement:

"The hand-crafted zinc and glass exterior wraps the energy of a multi-purpose arena full of social gathering spaces and a new public plaza extends the development as a year-round catalyst for the transformation of downtown Milwaukee. Inspired by the natural beauty of Wisconsin’s rivers, lakes and forests, this new Wisconsin landmark will stand out as an iconic addition to the cityscape and seamlessly connect with surrounding neighborhoods." 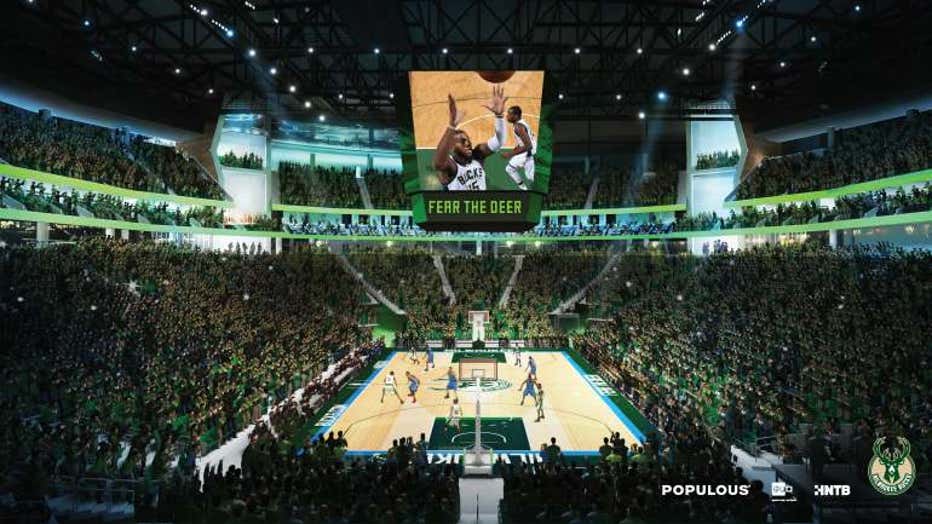 The seating environment of the new arena will be intimate for all events and intimidating for visiting NBA teams and Marquette opponents. Both seating tiers are top-loaded which minimizes breaks in the seating and thereby maximizes overall seating de

Greg Uhen of Eppstein Uhen said the following in a statement:

"Bringing this arena to fruition is certainly the first big step in creating the vision for the arena district neighborhood, but it will also serve to represent our city and state in a way that we have not seen before. People will be amazed at how well this new venue enhances the experience for all patrons, not just for world class NBA basketball, but for all events hosted here."

There will be public hearings in April and May, and then the plans will go to the City of Milwaukee's Zoning Committee and the full Milwaukee Common Council for approval.