Oconomowoc woman turns tragedy into triumph on the ice

Those carefully laid out plans in life don’t always turn out the way you’d expect them to. Oconomowoc’s Laura Dwyer knows that all too well.

HARTLAND, Wis. - Those carefully laid out plans in life don’t always turn out the way you’d expect them to.

Oconomowoc’s Laura Dwyer knows that all too well.

In May 2012, Dwyer was on a routine landscaping job.

"A tree branch 40 feet high in the air, a thousand plus pounds from an 80-foot sugar maple broke, came down and hit me square in the back," said Laura Dwyer, a Paralympian hopeful.

Dwyer sustained 26 broken ribs, 3 broken toes and a spinal cord injury at T12 and L1. She was paralyzed from the waist down.

As Dwyer adjusted to her new reality in the hospital with her husband Chris and her two sons by her side, she was left wondering, what’s next?

"I did use my life as one big excuse not to move forward," said Dwyer. "I think after about four years, I started seeing a counselor. I hadn't tried to do anything for myself."

Dwyer’s next chapter began in December 2019, when she happened upon an adaptive curling clinic in Wauwatosa. 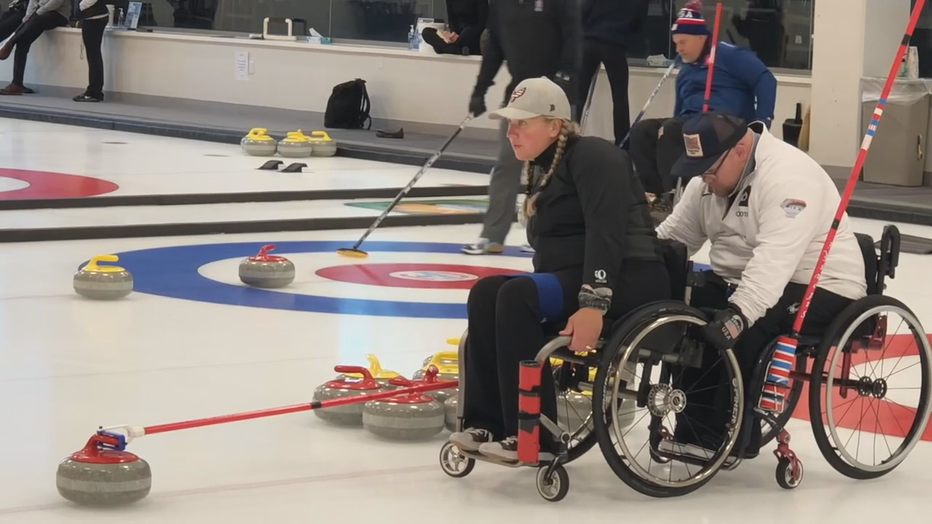 "It felt more like shuffleboard at first," said Dwyer. "They said if you love this, keep at it. That was the national coach and he sent me an email and he just said, how would you like to become a Paralympian? And I emailed back, I'm in. Sign me up. The rest is sort of history."

In just a year and a half on the ice, which included taking a pause because of the pandemic, Dwyer was eventually named as one of eight athletes selected to the 2021 U.S. Wheelchair Curling Team.

"Being a Paralympian hopeful it's fair to say, is exciting," said Dwyer.

In the offseason, Dwyer goes to the Hartland Movement Center to increase her upper body strength.

She also trains in Chaska, Minnesota on the ice with other elite curlers.

As Dwyer explains here, she curls differently than an able-bodied athlete.

"Number one, we don't throw out of a hack," said Dwyer. "The hack is a little foot plate. Curlers do too. They have a little rubber pad. We don't. We have sticks with heads on them. I start from a locked position and put my stone on the end of mine, and I will actually throw it out from here. Also, able-bodied curlers have sweepers. Our job is to get it exactly in the right place without a sweeper."

With life taking a sweeping change, Dwyer’s path is now the one she’s meant to be on.

"That first trip that I went away, I felt that sense of fulfillment," said Dwyer. "That purpose that I had been longing for, that I didn't know that I was missing."

The Wheelchair Curling National Team is already selected for the 2022 Winter Paralympics this March in Beijing, so Dwyer is setting her sights on the 2026 Winter Olympics in Milan, Italy.

"It's what I'm striving for," said Dwyer. "It's my long-term goal to show myself, show my kids, show my husband, my family, friends, community, everyone that I'm in it. The thought of a medal being placed on, even that far out, that's enough to make me cry. It would mean the world to me."

This past weekend in Portage, Wis. Dwyer and the Team USA B-Team took third in the U.S. Open Wheelchair Bonspiel.

Moving forward, she will continue to train to be the first alternate female for Team USA in Beijing if duty calls.