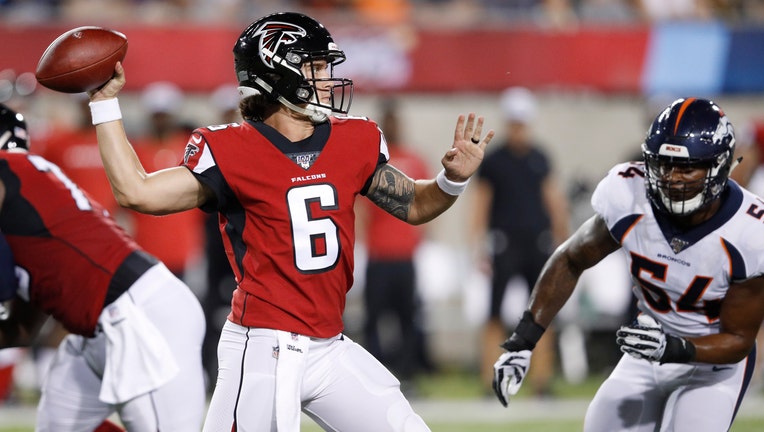 CANTON, OH - AUGUST 01: Kurt Benkert #6 of the Atlanta Falcons throws a pass in the first half of a preseason game against the Denver Broncos at Tom Benson Hall Of Fame Stadium on August 1, 2019 in Canton, Ohio. (Photo by Joe Robbins/Getty Images)

Green Bay has signed both Benkert and Blake Bortles — the No. 3 overall pick in the 2014 draft and former Jacksonville Jaguars starter — over the past week.

Rodgers, who reportedly wants out of Green Bay, and 2020 first-round pick Jordan Love had been the only quarterbacks on the Packers’ roster.

The Packers had brought Benkert and Chad Kelly in for tryouts during the team’s rookie minicamp last week.

The 25-year-old Benkert has never appeared in an NFL regular-season game.

Green Bay is facing an uncertain quarterback situation after ESPN reported hours before the draft that Rodgers doesn’t want to return to the team.

Packers CEO Mark Murphy posted a column on the team’s website later that week in which he said "this is an issue that we’ve been working on for several months."

Murphy acknowledged that he, general manager Brian Gutekunst and coach Matt LaFleur had met with Rodgers "on a number of occasions" during the offseason.

Gutekunst has said he doesn't plan to trade Rodgers, who has three years remaining on his contract.

"We want him back in the worst way," LaFleur said Friday. "I know he knows that and, you know, we’ll continue to work at it each and every day."