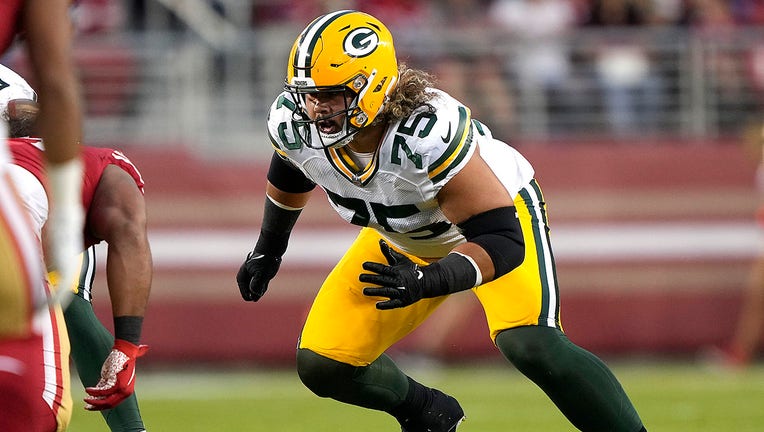 SANTA CLARA, CALIFORNIA - AUGUST 12: Sean Rhyan #75 of the Green Bay Packers blocks against the San Francisco 49ers during the fourth quarter of an NFL preseason football game at Levi's Stadium on August 12, 2022 in Santa Clara, California. (Photo by

The penalty means the third-round draft pick out of UCLA must sit out the rest of the regular season.

NFL officials announced the suspension Friday. The Packers said they wouldn’t have any comment on the matter because of the confidentiality of the process.

Rhyan has participated in only one play this season and for no offensive snaps. He was active and appeared in one special-teams play on Nov. 6 in a 15-9 loss at Detroit.

He dressed but didn’t play in five games and was ruled inactive for five other games.

Rhyan started 31 games at UCLA. He earned second-team all-Pac-12 honors from The Associated Press and was a first-team all-conference selection from the league’s coaches last year while playing left tackle. Rhyan had been working primarily at guard this year, though the Packers’ roster lists him as a guard/tackle.

Green Bay selected him with the 92nd overall pick in the draft.

The suspension of their 2022 third-round pick comes one week after the Packers released their 2021 third-round selection, wide receiver/punt returner Amari Rodgers. The Packers had sent the No. 92 and No. 135 overall selections in the 2021 draft to the Tennessee Titans for the right to take Rodgers at No. 85.