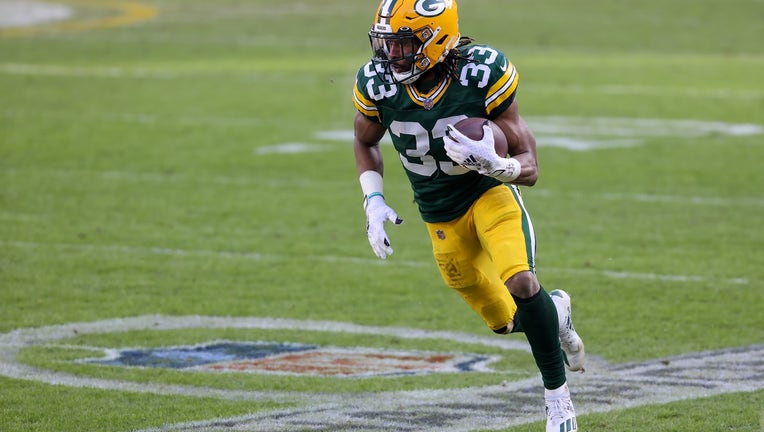 GREEN BAY, WISCONSIN - JANUARY 24: Aaron Jones #33 of the Green Bay Packers runs with the ball in the second quarter against the Tampa Bay Buccaneers during the NFC Championship game at Lambeau Field on January 24, 2021 in Green Bay, Wisconsin. (Phot

GREEN BAY, Wis. - The Green Bay Packers have chosen to not play a game of tag -- and it means running back Aaron Jones will hit the free agency open market on March 17.

The NFL deadline for applying franchise tags -- tying a player to the team -- was 3 p.m. Tuesday, March 9. The Packers did not retain the team's rights to any free-agent-to-be through the tag system. The most notable player involved would be Aaron Jones. The running back will indeed hit the free agency open market.

Jones is 26 years old -- and coming off a Pro Bowl season. But he has had some injury issues and plays a physically demanding position.

Center Corey Linsley was another candidate for a tag, but he is bound for free agency as well.

It should be pointed out that this decision does not preclude the Packers from working out a deal with Jones or Linsley.

The Wisconsin Humane Society is welcoming nearly 75 animals from Texas in wake of the recent severe weather that devasted much of the state.

Throughout March, the Bucks and Cousins will donate a meal to a child at a Boys & Girls Club location in Wisconsin every time someone signs up for the Cousins Club Loyalty Program.