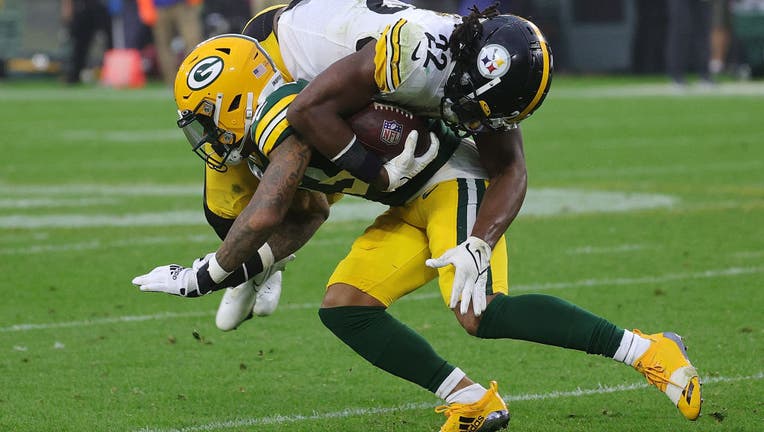 GREEN BAY, WISCONSIN - OCTOBER 03: Najee Harris #22 of the Pittsburgh Steelers is brought down by Jaire Alexander #23 of the Green Bay Packers during a game at Lambeau Field on October 03, 2021 in Green Bay, Wisconsin. (Photo by Stacy Revere/Getty Im

GREEN BAY, Wis. - Already accustomed to playing without their top pass rusher, the Green Bay Packers now must prepare for the likely absence of their best cornerback, Jaire Alexander.

Alexander injured a shoulder in the second half of the Packers’ 27-17 victory over the Pittsburgh Steelers on Sunday. Without getting into specifics, Packers coach Matt LaFleur said Monday he had spoken with head athletic trainer Bryan Engel and team physician Patrick McKenzie about Alexander’s situation.

"They’re just getting some other opinions on how to proceed, I guess, is the best way for me to say it right now," LaFleur said.

When LaFleur was asked if he could rule out a worst-case scenario, he replied that "everything's kind of getting looked at right now."

If Alexander misses significant time, it would represent arguably the toughest blow yet for a team already dealing with multiple injuries. 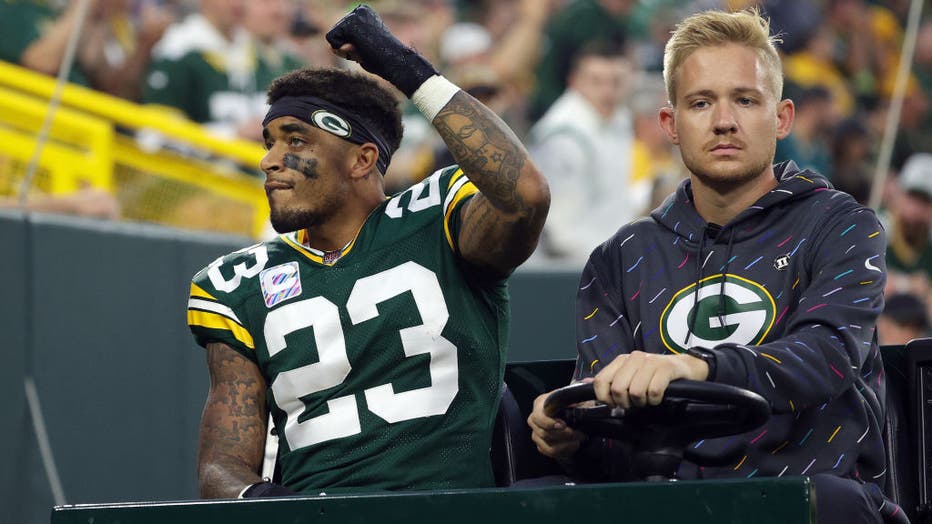 Outside linebacker Za’Darius Smith, who had a combined 26 sacks in 2019-20, hasn’t played since a season-opening 38-3 loss to the New Orleans Saints and might miss the rest of the season.

"We’re hopeful to get him back, but as far as the timeline, I just know it’s going to be a while," LaFleur said. "I know he’ll do everything he can to try to get back because he’s a big part of this football team."

The Packers (3-1) played without guard/tackle Elgton Jenkins (ankle) for a second straight game Sunday and also were missing linebacker Krys Barnes and cornerback Kevin King due to concussions.

"You can never have enough great players out there," LaFleur said. "Right now, we’ve got a few of our stud players on the bench due to injury."

Through it all, the Packers have won three straight games to lead the NFC North. They’ve beaten San Francisco and Pittsburgh the past two weeks while missing their two best offensive linemen.

"If you would’ve told me early in the season we’d be without arguably two of our best linemen for a couple of games and play those two fronts, I would’ve been ecstatic with two wins," quarterback Aaron Rodgers said after Sunday’s game. "And here we are 3-1, beating two fronts without Dave and without Elgton."

The broadcast schedule for postseason games through Sunday was announced on Monday, Oct. 4 – and the Milwaukee Brewers are playing the early games in the NLDS on Friday and Saturday.

Wisconsin is listing quarterback Graham Mertz as questionable for Saturday's game at Illinois after a chest injury knocked him out of the weekend loss to Michigan.