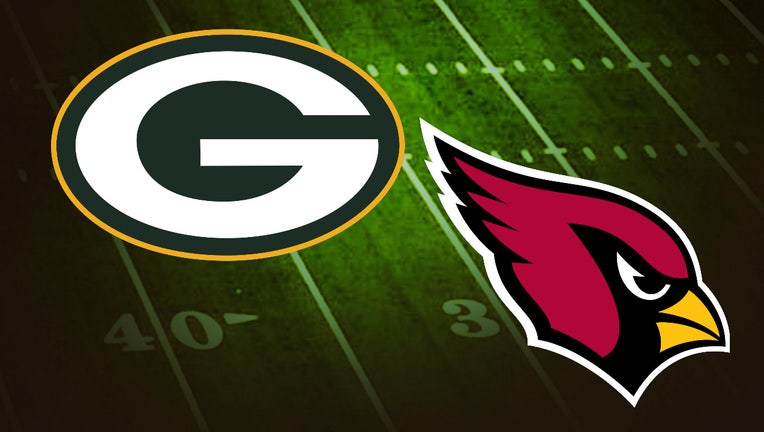 GLENDALE, Ariz. - The Green Bay Packers topped the Arizona Cardinals in what turned out to be a thrilling game in the desert on Thursday night, Oct. 28. The final – 24-21, Green Bay.

Arizona was first to score in the game – with a little more than six minutes left in the first quarter. Cardinals running back Chase Edmonds ran the ball 11 yards for a touchdown – and Arizona converted on the extra point to take a 7-0 lead.

Two minutes into the second quarter, Green Bay punched back. Packers running back Aaron Jones ran for a two-yard score. Kicker Mason Crosby converted on the extra point – and that knotted up the game at 7-7.

About midway into the second quarter, a Packers punt was touched but not caught by the Cardinals – and the Packers recovered inside of the five-yard line.

Three Packers attempts to punch it into the endzone were unsuccessful. So Green Bay settled for a 21-yard field goal by Mason Crosby with about 6:30 left in the first half. The Packers took a 10-7 lead. That is where the first half wrapped up on the scoring front.

At the start of the second half, the Packers defense came out strong – forcing Arizona to lose yardage early. On third down of the Cardinals' first series, quarterback Kyler Murray gave up an interception to the Packers Henry Black, who nabbed the ball on the Arizona 15.

The Packers immediately capitalized on the turnover. Just a few plays later, Green Bay quarterback Aaron Rodgers threw a two-yard touchdown pass to Randall Cobb. With the extra point, it put the Packers up, 17-7.

The Cardinals made it a three-point game on the very next series. Arizona capped a 12-play, 81-yard drive with a two-yard run from running back James Conner. With about 6 ½ minutes left in the third quarter, the Packers held a slim 17-14 lead.

That lead was extended after the very first play in the fourth quarter. Rodgers threw a six-yard touchdown pass to Cobb (his second of the night). The Packers went up by two scores, 24-14, with that 12-play, 91-yard drive.

On the next series, Arizona drove the ball 75 yards in 11 plays – capped by a nine-yard run by Conner (his second of the night). That once again closed the gap – the Packers led 24-21 with just under 11 minutes to play in the game.

The Packers could not cap off a 13-play drive – to get the ball in the endzone. So with a little less than three minutes left in regulation, Green Bay turned over the ball on downs.

The Cardinals on the next series had the opportunity to either tie the game – or win it outright. But with 15 seconds on the clock, Kyler Murray threw an interception in the endzone.

The Packers won it, 24-21, and now hold a tie-breaker against the Cardinals in the NFC. Green Bay's record is now 7-1 on the season.

According to Packers.com, Green Bay is looking for its first win at the Cardinals since 2009. Including the postseason, two of the last three games between the two in Arizona have gone to overtime.

The last time the Packers played an undefeated team with seven-plus wins was Oct. 28, 2018, at the 7-0 Los Angeles Rams.

Seven weeks into the 2021 NFL season, Aaron Rodgers is still on top of his game.

Former Green Bay Packers quarterback Brett Favre has repaid $600,000 in Mississippi welfare money, a state auditor said. But he could still be sued.

Wisconsin Center expansion gets the green light in downtown Milwaukee.