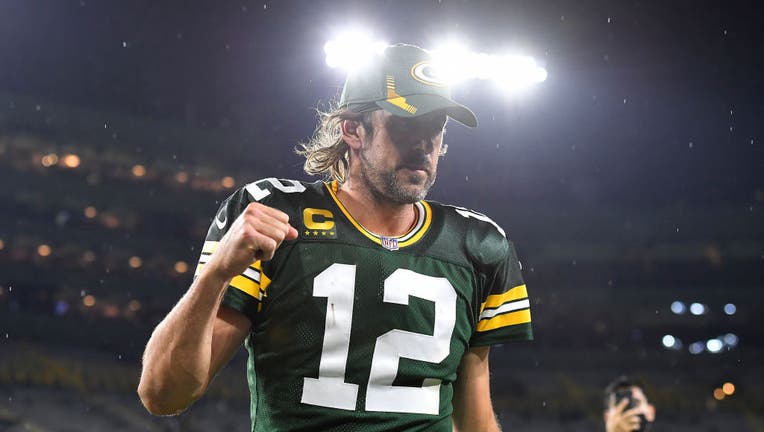 GREEN BAY, WISCONSIN - SEPTEMBER 20: Aaron Rodgers #12 of the Green Bay Packers reacts as he walks of the field following the team's win against the Detroit Lions during an NFL football game at Lambeau Field on September 20, 2021 in Green Bay, Wiscon

After an up-and-down offseason, the reigning NFL MVP decided to grow out his hair and can even sport a man bun. Rodgers said there is a reason behind the change in appearance.

During a Thursday appearance on "The Pat McAfee Show," Rodgers said he is growing out his long hair for a Halloween costume. He claimed the year-long process will come to fruition on Oct. 31.

"This has been a year in the making for my costume," Rodgers said on the show before dropping a hint. "Somebody who is a hero of mine who has longish hair."

Rodgers didn’t give any more details away because he plans on making it a surprise when the holiday comes around.

Two weeks into the 2021 NFL season, Rodgers has the Packers at 1-1. After getting destroyed by the New Orleans Saints in the season opener, Green Bay bounced back against its NFC North rivals on Monday Night Football.

Rodgers completed 22 of 27 passes for 255 yards with four touchdowns in a 35-17 victory over the Detroit Lions. Next up for the Packers are the 49ers in San Francisco on Sunday Night Football.

Wisconsin is experiencing a shortage of intensive care unit and medical-surgical beds as COVID-19 hospitalizations rise.