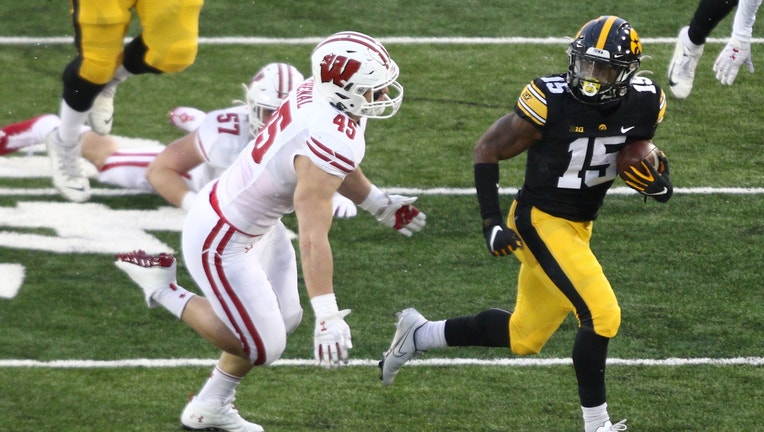 IOWA CITY, IOWA - DECEMBER 12: Running back Tyler Goodson #15 of the Iowa Hawkeyes runs up the field during the first half in front of linebacker Leo Chenal #45 of the Wisconsin Badgers at Kinnick Stadium on December 12, 2020 in Iowa City, Iowa. (Pho

IOWA CITY, Iowa (AP) - Spencer Petras threw for 211 yards and two touchdowns to Ihmir Smith-Marsette to lead No. 19 Iowa past No. 25 Wisconsin 28-7 Saturday, the Hawkeyes' sixth win in a row.

Iowa (6-2, 6-2 Big Ten) beat the Badgers (2-3, 2-3) for the first time since 2015 to reclaim the Heartland Trophy. Hawkeyes players celebrated by making snow angels after flurries picked up in the second half and blanketed the field in white.

Iowa’s offense came alive in the second half after both teams struggled in the first. Petras found Smith-Marsette for 19-yard touchdown in the third quarter to give the Hawkeyes a 14-0 lead.

The Badgers cut it in half after a muffed punt set them up at the Iowa 25, with Nakia Watson punching the ball in from the 1.

Iowa took control from there.

Petras connected with Smith-Marsette for a 53-yard touchdown to make it 21-7 late in the third.

Wisconsin was still in position to come back in the middle of the fourth quarter when Iowa went three-and-out and Australian punter Tory Taylor, in his first year playing American football, mishandled the snap and kicked the ball while it was on the ground. That resulted in a penalty for illegal kicking, setting up the Badgers at the Iowa 5.

The Badgers went nowhere on three plays, and Mertz flipped a pass into the end zone that Jack Campbell intercepted.

It was game over on the next play when Tyler Goodson broke an 80-yard touchdown run to make it 28-7.

Smith-Marsette finished with seven catches for 140 yards, and Goodson had 106 yards rushing.

The Badgers gained just 225 total yards, 56 on the ground.

Iowa beat a Top 25 opponent for the first time this season and is poised to move up in the poll. Wisconsin will likely drop out of the rankings.

Iowa: The downfield passing game showed up with Petras' career-long 53-yard pass to Smith-Marsette, who also had a 38-yard gain. Petras didn't throw much in the second half, but he was effective when he did.

Wisconsin: Wisconsin’s offense continues to struggle. It has scored a combined 20 points in losing its last three games.

Wisconsin and Iowa both play Dec. 19 against Big Ten opponents to be announced Sunday.

Green Bay Packers center Corey Linsley has been named the Packers’ team nominee for the NFL’s Walter Payton Man of the Year Award.