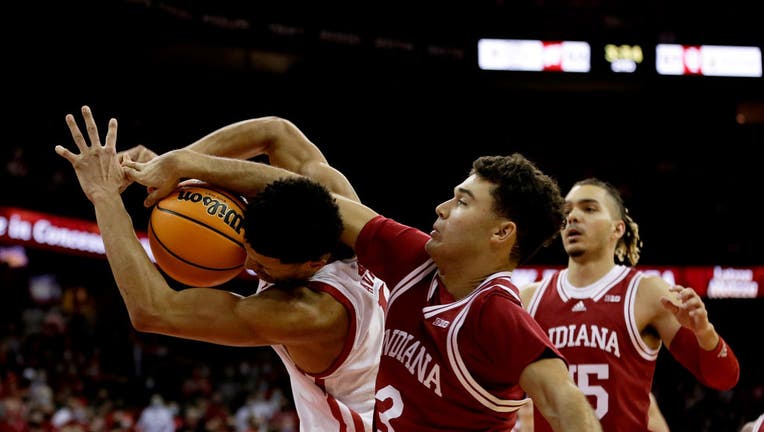 MADISON, WISCONSIN - DECEMBER 08: Johnny Davis #1 of the Wisconsin Badgers is fouled going up for a shot by Anthony Leal #3 of the Indiana Hoosiers during the second half of the game at Kohl Center on December 08, 2021 in Madison, Wisconsin. (Photo b

MADISON, Wis. - Wisconsin is just beginning its Big Ten schedule, but already is establishing a reputation as a team that’s never out of a game — no matter how far it falls behind.

The 22nd-ranked Badgers won the Maui Invitational last month by erasing double-digit deficits in victories over Texas A&M and Saint Mary’s. They dug themselves an even deeper hole Wednesday night before rallying from 22 points down to beat Indiana 64-59 in their conference opener.

"It’s easier to play when you’re down because then you get more aggressive," Wisconsin’s Johnny Davis said.

Davis scored 23 points and made a go-ahead 3-pointer with 1:18 left to help Wisconsin (8-1, 1-0 Big Ten) win its sixth straight and match its biggest comeback in school history.

This also was the biggest deficit any Division I team has overcome in a victory this season.

The stunning rally continued Wisconsin’s home domination of this series.

Brad Davison, the Badgers’ fifth-year senior guard, insisted after the game he was unaware of the streak. He asked how long it had been since Indiana’s last victory in Madison.

"That’s before I was born, and everyone says I’m super old," Davison quipped.

Indiana (7-2, 1-1) nearly ended the streak last year, but fell 80-73 at Wisconsin in double overtime. This loss proved even more painful.

"I’ve just got to get them over the hump," Indiana coach Mike Woodson said. "Because we just, this is a definitely a winnable game. Got to give Wisconsin a lot of credit, because they kept fighting until they got it done."

Wisconsin had the game’s final 11 points and outscored Indiana 16-2 over the last 5 minutes, 50 seconds. Race Thompson had 12 points and Xavier Johnson 10 to lead Indiana, which missed 14 of its last 15 shots.

The Hoosiers still led 59-57 when Davison forced a steal with 1:41 left. On the Badgers’ ensuing possession, center Chris Vogt passed to Davis, whose corner 3-pointer put Wisconsin ahead.

"Once I hit that 3, I knew we were going to win the game because we’d been playing solid defense the whole second half," Davis said.

Indiana’s Xavier Johnson, Race Thompson and Parker Stewart all missed potential go-ahead shots on the Hoosiers’ next possession. After the ball went out of bounds off Wisconsin to give Indiana another opportunity, Stewart drove down the left side of the lane and had his shot attempt blocked by Tyler Wahl with 32 seconds left.

Freshman guard Chucky Hepburn sealed the victory by going 4 of 4 on free-throw attempts over the final 24 seconds. Those were his only points of the night.

Indiana’s collapse came after the Hoosiers dominated the first half. After Wisconsin scored the game’s first five points, Indiana went on a 26-4 run over the next nine minutes.

"Hopefully nobody left early, in terms of fans," Wisconsin coach Greg Gard said. "If they did, that will teach them to not give up on this team. I’m so proud of the grit, the fight, the togetherness."

Indiana: After shooting 54.8% in the first half, the Hoosiers went just 7 of 31 over the final 20 minutes. They also were just 6 of 13 on free-throw attempts. ... Trayce Jackson-Davis, a preseason Associated Press All-America selection, was held to a season-low nine points.

Wisconsin: The Badgers withstood the absences of reserve guards Lorne Bowman II and Jahcobi Neath as well as reserve forward Markus Ilver due to what school officials described as a non-COVID-19 illness. ... Vogt had nine points and six rebounds. He entered this game with seven points all season.

Wisconsin’s chances of moving up in the poll could depend on how the Badgers do Saturday when they visit No. 21 Ohio State.

Wisconsin: At No. 21 Ohio State on Saturday.

On Thursday, owners at a Waukesha condo building are expected to have more time to move out. This, as just-released drone footage is offering the closest look yet at the problems that forced the evacuation.

Oconomowoc woman turns tragedy into triumph on the ice

Those carefully laid out plans in life don’t always turn out the way you’d expect them to. Oconomowoc’s Laura Dwyer knows that all too well.