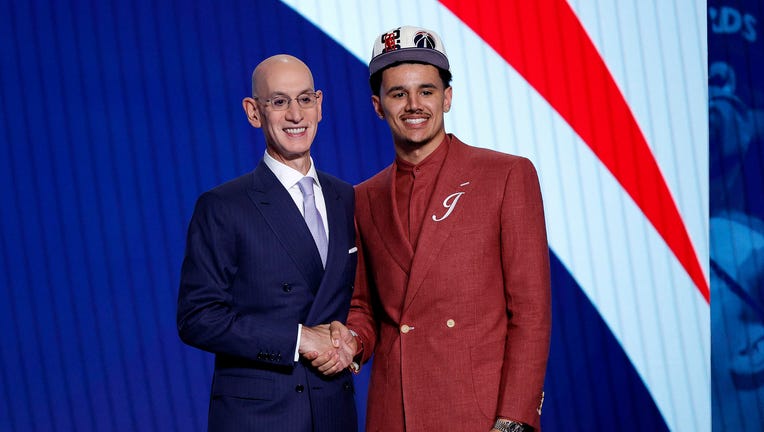 NBA commissioner Adam Silver and Johnny Davis pose for photos after Davis was drafted with the 10th overall pick by the Washington Wizards during the 2022 NBA Draft. (Photo by Sarah Stier/Getty Images)

The 6-foot-5 Davis averaged 19.7 points per game as a sophomore last season with the Wisconsin Badgers – up from 7.0 in 2020-21. He earned first-team All-America honors for his two-way contributions, and now he joins a team that's coming off a disappointing season in which star guard Bradley Beal was limited by a wrist injury.

The big question for the Wizards this offseason is whether they can keep Beal, but on draft night they added a tough wing who averaged an impressive-for-his-size 8.2 rebounds last season.

Davis' outside shooting is a question mark – he made just 31% of his 3-pointers as a sophomore.

Draft day last year was when Washington agreed to deal Russell Westbrook to the Los Angeles Lakers. The Wizards replaced him with Spencer Dinwiddie, but he was also traded before the season was over, so Washington entered this offseason with point guard as a significant need.

It's not clear if Davis can help the Wizards much in that respect, but he led Wisconsin to a share of the Big Ten title, with a 37-point, 14-rebound performance at Purdue among the highlights.