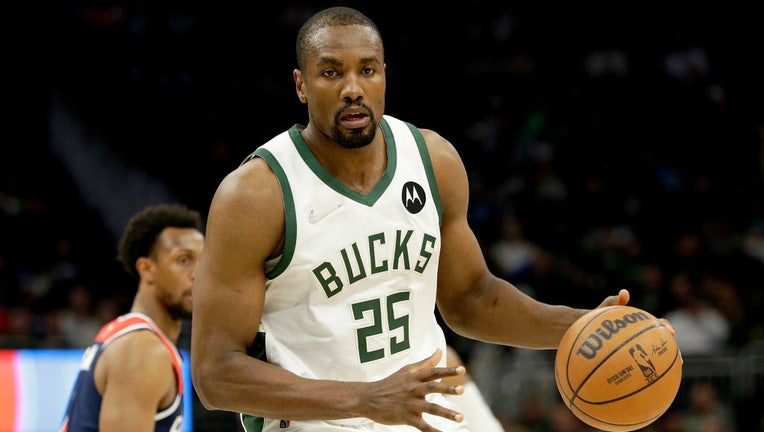 MILWAUKEE, WISCONSIN - MARCH 24: Serge Ibaka #25 of the Milwaukee Bucks looks to pass during the second half of the game against the Washington Wizards at Fiserv Forum on March 24, 2022 in Milwaukee, Wisconsin. (Photo by John Fisher/Getty Images)

MILWAUKEE - The Milwaukee Bucks announced on Tuesday, July 19 that the team has re-signed center Serge Ibaka.

A news release says the 32-year-old Ibaka played in 19 games (2 starts) with the Bucks last season after being acquired in a trade from the Los Angeles Clippers in February. With Milwaukee, Ibaka averaged 7.0 points and 5.3 rebounds in 17.8 minutes per game while shooting 51.9% from the field. Overall last season, Ibaka made appearances in 54 games (12 starts) with the Clippers and Bucks and averaged 6.8 points and 4.6 rebounds per contest.

A three-time All-Defensive First Team selection who has led the league in total blocks four times and blocks per game twice, Ibaka is currently second among active players in blocked shots with 1,752. Entering his 14th season in the NBA, the Republic of the Congo native has appeared in 903 games (697 starts) with Oklahoma City, Toronto, Los Angeles and Milwaukee and holds career averages of 12.1 points, 7.2 rebounds and 1.9 blocks per game while shooting 51.3% from the field.