MILWAUKEE - He came from nothing, and now he's in Milwaukee.

MarJon Beauchamp's path to the NBA was a constant uphill climb, but now he has championship aspirations as a rookie.

"A lot of people didn't believe in me," said Beauchamp.

Beauchamp will be the first to admit that his journey to the NBA was never easy.

Homeless at a young age, the Bucks newcomer jumped around from high school to high school. 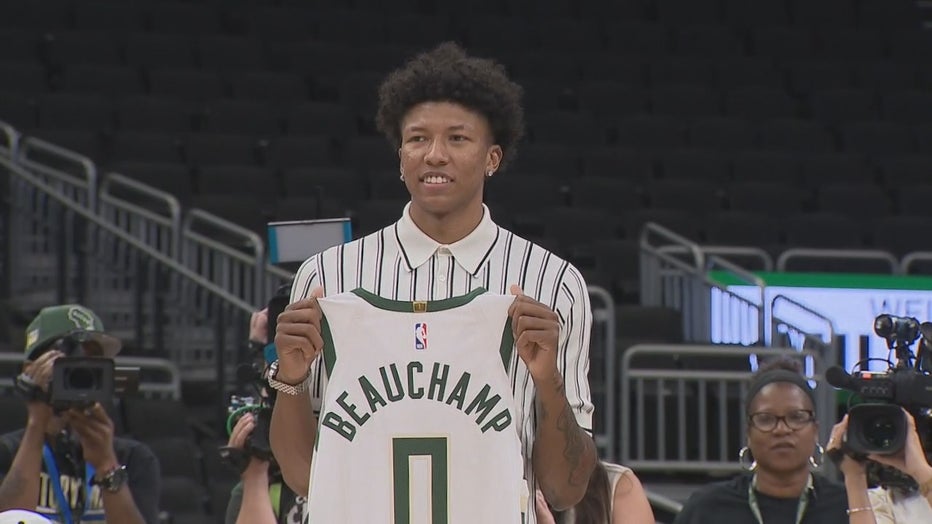 Washington to Arizona to California.

"It made me who I am today and really made me stronger like mentally, and I feel like I can get through anything," Beauchamp said.

"Everybody is looking for inspiration and hope and everyone's story is so different and MarJon went through all of it and still tried to focus in on his number one dream and goal which was basketball and trying to play at the highest possible level he could get to," said Wilson.

The highest level came calling in the form of Milwaukee's number 24 pick in the NBA Draft.

Wilson was over the moon.

During the draft process, it became apparent to the Bucks what kind of person and player they were getting.

"He was a kid that didn't give up on his dream," said Bucks Assistant General Manager Milt Newton. "He was homeless at one point. And what it tells us is that he is a fighter."

Another thing that drew Milwaukee to MarJon was his time with G-League Ignite.

Beauchamp says he built some good habits both on and off the court in that program.

Bucks General Manager Jon Horst says it will be a huge benefit.

"I think he's a great product of it, and we have the chance now to carry that torch for what he started in ignite and really get the most out of him," said Horst.

The man who is tasked with getting the most out of him is Bucks Head Coach Mike Budenholzer.

He believes Beauchamp's upside is his versatility and has the potential to defend anyone on the floor.

"All of us are looking for anybody that can help us win, and we feel like MarJon's a winner, but he's going to have to earn it just like everybody does," said Budenholzer. "To have veterans around him, I think is very valuable for him."

Those veterans are already trying to help their newest teammate.

"Draft day, Giannis texted me, he's like welcome me to the team, now let's go win a ship," said Beauchamp. "I was like wow well he's ready. Khris Middleton reached out, and he just welcomed me to the team and I can't wait to learn from him."

He believes with the right amount of dedication, he can become a player like Middleton.

"I never thought I'd be in this position," Beauchamp said. "But yeah, I'm just excited, and I just want to learn and grow and be one of them one day."

From nobody seeing what Beauchamp was made of, it appears the Bucks are now believers.