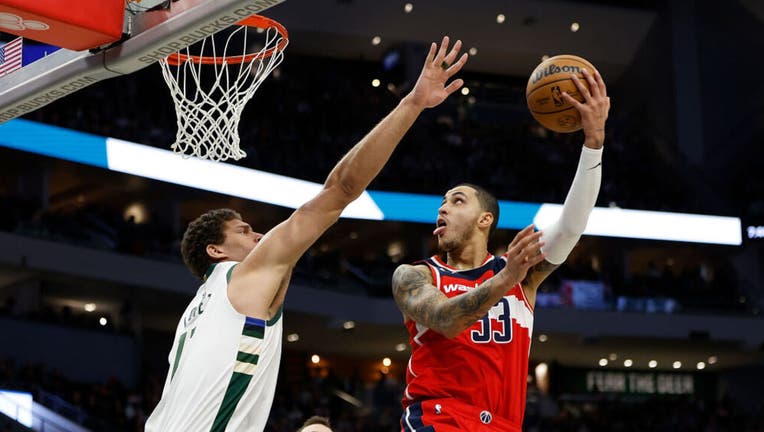 Kyle Kuzma #33 of the Washington Wizards scores over the reach of Brook Lopez #11 of the Milwaukee Bucks during the first half of a game at Fiserv Forum on Jan. 1, 2023 in Milwaukee, Wisconsin. (Photo by John Fisher/Getty Images)

The scuffling Bucks played without Giannis Antetokounmpo, who sat out due to left knee soreness. Antetokounmpo is averaging 38 points and 14.6 rebounds over his last six games, which included a 43-point, 20-rebound effort in Friday night’s win over Minnesota that snapped Milwaukee’s four-game losing streak.

Jrue Holiday also missed the game with an illness, and Khris Middleton sat out for the eighth consecutive game due to right knee soreness.

Daniel Gafford had 17 points for the Wizards (17-21), who weren’t at full strength, either. They played without leading scorer Bradley Beal, who is dealing with left hamstring soreness.

Washington led 34-17 after the first quarter, paced by Gafford’s 13 points, as the Wizards exploited a two-center lineup with Bucks big man Brook Lopez benched early on with foul trouble. Milwaukee shot 26% overall and just 3 of 14 from long range in the period, while the Wizards connected on half of their shots.

The Wizards led by 26 in the second quarter and held a 68-50 advantage at halftime. Washington shot 57.4% in the first half, while Milwaukee connected on just 34.6% of its shots.

Washington remained easily in control throughout the second half as the cold-shooting Bucks failed to mount any sustained runs.