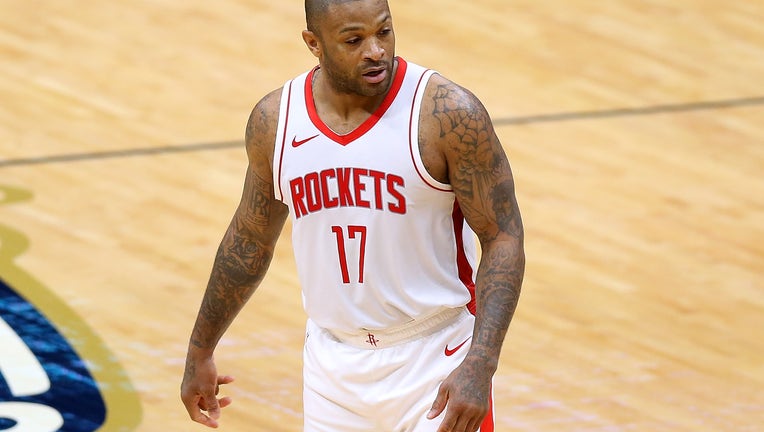 NEW ORLEANS, LOUISIANA - FEBRUARY 09: P.J. Tucker #17 of the Houston Rockets reacts against the New Orleans Pelicans during the first half at the Smoothie King Center on February 09, 2021 in New Orleans, Louisiana. NOTE TO USER: User expressly acknow

MILWAUKEE - P.J. Tucker is now a member of the Milwaukee Bucks, an addition for the team's playoff push.

The Bucks announced Friday that they had acquired Tucker as well as guard Rodions Kurucs from the Houston Rockets and had sent guard D.J. Augustin plus forward D.J. Wilson to Houston.

"P.J. Tucker checks all the boxes," Bucks general manager Jon Horst said in a statement. "He is a great teammate who brings a veteran presence with playoff experience. P.J.’s a versatile, high-IQ defender, and on the offensive end he plays with discipline, is unselfish, and spaces the court with his ability to knock down the three."

The Bucks announced the trade Friday, two days after Augustin and Wilson participated in warmups before a 109-105 victory at Philadelphia but weren’t with the team during the actual game. ESPN first reported the trade.

"I can’t find the words to describe how much the city of Houston means to me," Tucker said. "The city embraced me from Day 1 and stole my heart with all the love I was shown."

Tucker gives the Bucks a solid defender and quality 3-point shooter, especially from the corners. The Bucks (26-14) have won five straight games and nine of their last 10, putting them 1 ½ games behind Philadelphia and Brooklyn in the Eastern Conference standings.

The Rockets said last week they were attempting to trade the 35-year-old Tucker, who is in the final season of a $31.8 million, four-year contract.

Tucker had started each of the 32 games in which he appeared and was averaging 4.4 points. He was shooting 31.4% from 3-point range but had been a more reliable 3-point shooter in previous seasons.

Kurucs, 23, has played in 16 games for Brooklyn and Houston this season. He has scored a total of 16 points.

Augustin, 33, was averaging 6.1 points, 3 assists and 19.3 minutes in his first season with Milwaukee after spending four seasons in Orlando. The 25-year-old Wilson had averaged 3.6 points in 12 games this season and hadn’t been able to work his way into the Bucks’ rotation.

Much like they did with cable in the 1980s and satellite television in the 1990s, the NFL on Thursday made another significant transition in the way its games are viewed.