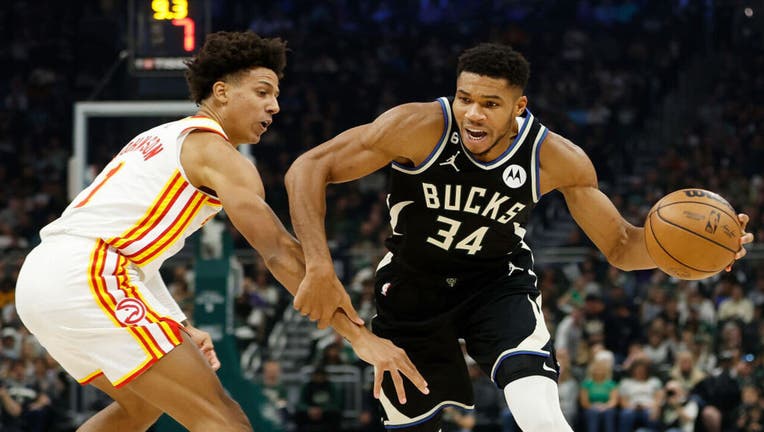 MILWAUKEE - Jrue Holiday sank a tiebreaking 3-pointer with 45.3 seconds left and finished with 25 points, 10 assists and seven rebounds as the Milwaukee Bucks edged the Detroit Pistons 110-108 on Monday night to stay unbeaten.

One night after beating the defending champion Golden State Warriors to snap a five-game skid, the young Pistons nearly took down another NBA heavyweight.

Although they never led, the Pistons rallied from a 16-point deficit to tie the score at 105-all when Cunningham found Isaiah Stewart under the basket with 57.6 seconds left. Holiday answered by sinking a step-back 26-footer on Milwaukee’s next possession.

After Cunningham missed a shot that would have cut the Bucks’ lead to 108-107 with about 35 seconds left, Detroit got one more chance when Bogdanovic stole the ball from a driving Antetokounmpo with less than 15 seconds left.

The Pistons worked the ball to an open Cunningham, whose 3-point attempt with about five seconds left bounced off the side of the rim. Brook Lopez hit two free throws with 1.5 seconds remaining to seal the victory before Bogdanovic made a 3-pointer at the buzzer.

Detroit was missing rookie center Jalen Duren, who sprained his left ankle Sunday in a 128-114 victory over the Warriors that snapped a five-game skid. Duren, the 13th overall pick in the 2022 draft, has averaged 7.4 points and 6.7 rebounds.

"They said that the swelling’s down and he had a good workout today, so hopefully he can make it in tomorrow and be available for the game on Wednesday," Pistons coach Dwane Casey said. "We’ll see."

Jaden Ivey scored 19, Hamidou Diallo 13, Stewart 11 and Saddiq Bey 10 for the Pistons. Bobby Portis had 15 points and 12 rebounds for the Bucks.