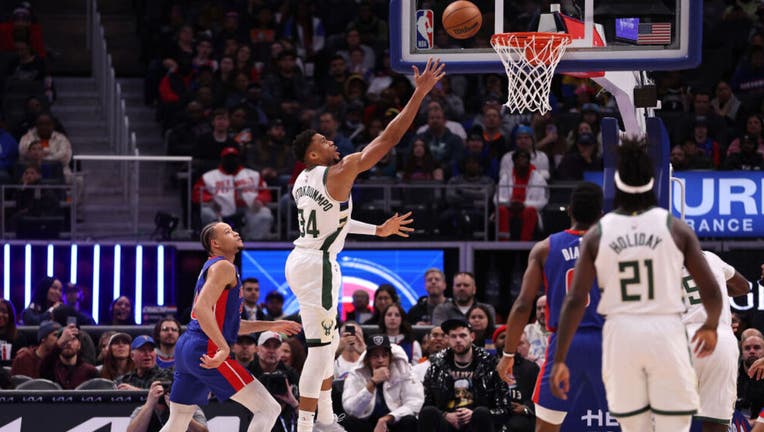 DETROIT - Giannis Antetokounmpo scored 20 of his 29 points in the first quarter, returning to the lineup after a five-game absence to lead the Milwaukee Bucks to a 150-130 win over the Detroit Pistons on Monday night.

The two-time MVP was joined by three-time All-Star Khris Middleton, putting the Bucks' prolific duo in the same lineup for the first time in more than a month.

Antetokounmpo had been out with a sore left knee. Middleton, who hadn't played since Dec. 15 due to a sore right knee, had eight points and four assists.

The Bucks scored 49 points in the first quarter, two shy of the NBA record, and led Detroit by 25 after Antetokounmpo made all six of his shots in eight-plus minutes.

Antetokounmpo didn't keep up his scoring pace the rest of the game, but he didn't have to with teammates such as reserve Bobby Portis scoring 12 of his 18 points in the second quarter.

Milwaukee led 83-55 at halftime and 115-92 after three quarters and finished with a season high in points in a game that wasn't competitive beyond the opening minutes. Mercifully, the Bucks held the ball and were called for a shot-clock violation in the final seconds when they were three points from matching the most by an NBA team this season.

Bojan Bogdanovic scored 33 points and rookie Jalen Duren had a season-high 23 points and 14 rebounds for the Pistons, who have won an Eastern Conference-low 12 games and are ahead of only Houston in the league-wide standings.