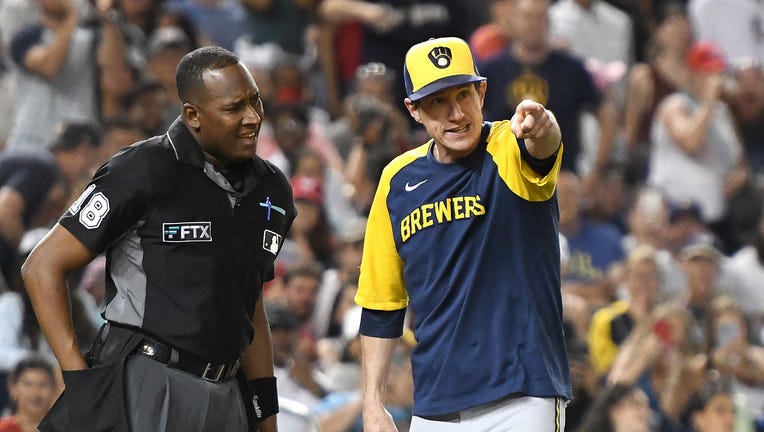 Craig Counsell of the Milwaukee Brewers argues a call with home plate umpire Ramon De Jesus during a game against the Nationals on June 10, 2022 in Washington. (Photo by Mitchell Layton/Getty Images)

Nelson Cruz and Maikel Franco also homered for the Nationals, who snapped a three-game skid in the opener of a 10-day, 11-game homestand.

Washington’s 19 hits were its most since posting a season-high 22 at San Francisco on April 29.

Milwaukee’s Craig Counsell, who is one victory shy of tying Phil Garner for the franchise record for managerial wins, was ejected in the fifth inning in the Brewers’ latest frustrating outing. Milwaukee has scored 14 runs during its slide.

The Nationals’ biggest outburst came in the sixth, when they built on a 6-3 lead. Bell hit a three-run homer off reliever Miguel Sánchez and, after a mound conference, Ruiz hit his second homer of the season on the first pitch he saw.

Counsell was gone by that point. He argued with home plate umpire Ramon De Jesus after consecutive pitches to Victor Robles in the fifth – first when he seemed to argue Robles touched a live ball and should be out, then when Robles’ swing hit catcher Omar Narváez while he was trying to throw out Luis García on a steal attempt at second.

García was sent back to first, but Robles eventually singled to left, prompting Counsell to come out to pull starter Aaron Ashby (1-5). He escalated his dialogue with De Jesus on his way to the mound and was quickly ejected.

Ashby yielded six runs and 13 hits — five on 0-2 counts — and dropped back-to-back starts for the first time this season.

Jace Peterson hit a two-run homer in the second and added a sacrifice fly in the fourth off Washington starter Erick Fedde (4-4), who otherwise faced minimal trouble in 5 2/3 innings. He allowed four hits and struck out four.

Franco’s solo homer in the fourth extended his hitting streak to 10 games.

Brewers: Milwaukee activated Narváez from the injured list (COVID-19) and placed C Alex Jackson (sprained left middle finger) on the 10-day injured list. … 2B Kolten Wong (right calf soreness) was out of the lineup for the third consecutive game.

Nationals: Cruz (back) returned to the lineup after a one-game absence. … RHP Aníbal Sánchez (cervical nerve impingement), who has yet to pitch this season, threw a light bullpen session.

Brewers: LHP Eric Lauer (5-1, 2.38 ERA) threw seven shutout innings against Washington on May 20 and is 1-1 with a 2.70 ERA in five lifetime starts against the Nationals.

Nationals: LHP Patrick Corbin (2-8, 6.71) is coming off a victory at Cincinnati on Sunday and will attempt to win back-to-back starts for the first time since June 15-20 of last year.