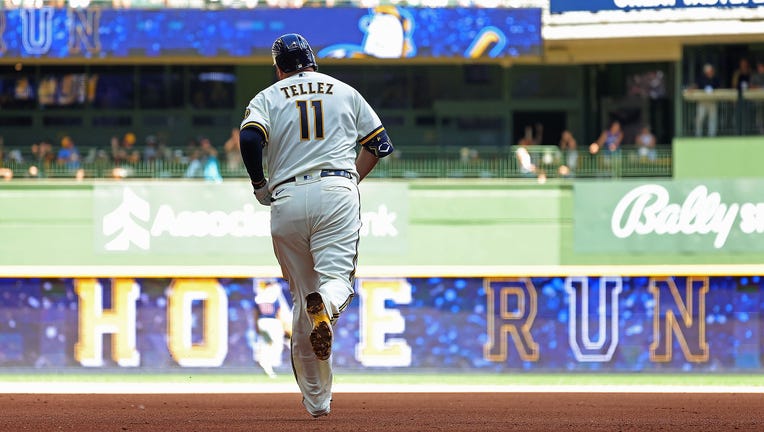 Rowdy Tellez runs the bases following a three-run home run during the fourth inning against the Minnesota Twins at American Family Field on July 27, 2022. (Photo by Stacy Revere/Getty Images)

Tellez homered off a wild Chris Archer (2-5) for a 3-0 lead in the first and against Jharel Cotton for an 8-3 advantage in a five-run fourth. Tellez has 20 homers, one shy of his career high in 2019 with Toronto, and nine multihomer games, including four this season. His only game with more RBIs was on May 4, when he had eight against Cincinnati.

Burnes (8-4) struck out 11 in six innings, reaching double digits for the eighth time this year and 20th in his big league career. The reigning NL Cy Young Award winner gave up three runs and five hits while walking none and retiring 14 of his last 15 batters.

Archer walked Milwaukee's first three batters in the fourth, and Cotten walked Christian Yelich with one out, forcing in the go-ahead run. Willy Adames added a sacrifice fly, and Tellez homered.

Luis Urías added a two-run homer in the fifth off Yennier Cano.

Garlick homered leading off the seventh against Jake McGee.

RHP Peter Strzelecki was recalled from Nashville by the Brewers, who optioned LHP Ethan Small to the Triple-A club.

Twins: LHP Danny Coulombe had season-ending surgery to repair the labrum in his left hip, manager Rocco Baldelli said. Coulomb has been on the injured list since May 28. … OF Max Kepler missed a second consecutive game with a mildly displaced right pinkie toe fracture. … 1B Miguel Sanó, who returned to action Tuesday after missing nearly three months with a torn meniscus in his left knee, wasn’t in the starting lineup but entered the game as a defensive replacement in the seventh. … RHP Bailey Ober, on the injured list since June 2 with a right groin strain, has begun playing catch. Ober missed 20 games earlier this season with a similar injury.