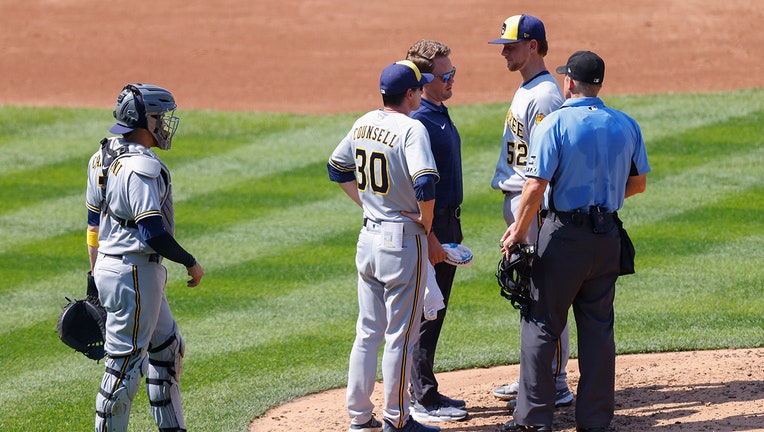 DENVER, CO - SEPTEMBER 7: Starting pitcher Eric Lauer #52 of the Milwaukee Brewers talks with Manager Craig Counsell #30 and a member of the training staff before exiting the game in the third inning as Victor Caratini #7 and home plate umpire Chris

DENVER - Eric Lauer exited in the third inning with left elbow tightness, and the Milwaukee Brewers hurt their fading playoff hopes with an 8-4 loss to the last-place Colorado Rockies on Wednesday.

"I couldn't really feel where my arm was, which was kind of alarming to me," Lauer said. "It just felt like Jell-O, so I was leaving a lot of those pitches up."

Recent call-ups Michael Toglia and Alan Trejo homered for the Rockies, who rallied from a 6-1 deficit to beat Milwaukee a night earlier. Kyle Freeland threw six innings of one-run ball.

The Brewers, who got ninth-inning solo homers from Andrew McCutchen and Luis Urías, fell 3 1/2 games behind Philadelphia and San Diego for the final NL wild card. They finished a 2-5 trip with concerns surrounding Lauer as they scramble to make the postseason for a fifth straight year.

Lauer said he had some tightness in his elbow before the game, but then started experiencing numbness. Counsell said Lauer would be examined Thursday.

"After doing all the testing, it's not super-concerning to me," Lauer said. "It seems like there's a lot of different muscle fatigue in there."

Colorado got four runs in the second, capped by Trejo's two-run drive. Following Trejo's second homer, a trainer accompanied Counsell to the mound, but Lauer (10-7) stayed in.

Toglia, a 2019 first-round pick from UCLA who made his big league debut on Aug. 30, drilled a slider an estimated 421 feet to left for a three-run homer and a 7-0 lead in the third.

"Today was a fun one," Toglia.

The trainer then returned to the mound and accompanied Lauer to the dugout.

"First time we just saw him grabbing his leg. That was nothing," Counsell said. "When we went out the second time, he had lost feeling."

"Missing any starts with not many games left is significant," Counsell said.

Milwaukee got one back when Keston Hiura tripled off the wall in right and scored on Victor Caratini's groundout in the fifth. Christian Yelich added an RBI double in the eighth off Justin Lawrence, but the Brewers fell nine games behind NL Central-leading St. Louis. Milwaukee led the division on Aug. 5.

"We're very much still in this thing," Counsell said. "We have a trip like this, it doesn't feel good, but we're going to leave today, wake up tomorrow and be right in the middle of this thing. ... That still has to be our mindset."

Freeland (8-9) allowed two hits and struck out eight on a hot, dry day that saw the temperature climb into the upper 90s. Freeland threw seven scoreless innings in a win in Milwaukee on July 25.

Brewers: 2B Kolten Wong was out of the lineup, a day after being removed in the sixth inning with a sore left knee. ... INF Mike Brosseau (oblique) went 2 for 2 with a walk as the DH for Class A Wisconsin.

Rockies: OF Kris Bryant (left plantar fasciitis) was without a walking boot in the clubhouse before the game, but is not close to returning. He has played in only 42 games because of various injuries.

The Rockies are focusing on young players over the final month, including Elehuris Montero. The 24-year-old, who went 1 for 4 with two strikeouts, was the top prospect acquired from St. Louis in the 2021 Nolan Arenado trade.

"It’s not there yet, as evident by the chase rate on the breaking ball (below the zone)," manager Bud Black said. "That’s the primary goal for him moving forward. The best hitters, they control the strike zone. They take their walks. Balls in the hitting area, they barrel. So that’s where we’re hoping he gets to, because he’s got talent."

Brewers: RHP Freddy Peralta (4-3, 3.56 ERA), given three days of extra rest as he deals with fatigue following his return from a shoulder injury, will start the second game of Thursday's home doubleheader against San Francisco. RHP Corbin Burnes (9-6, 3.02 ERA) works the opener for Milwaukee.