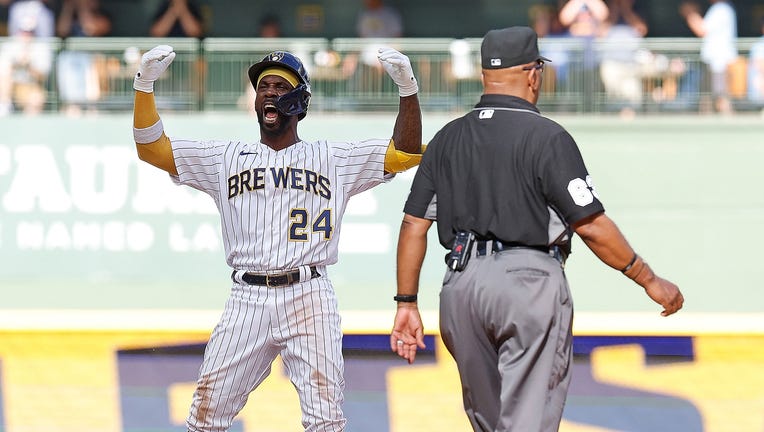 Andrew McCutchen reacts after hitting a two-run double to give the Milwaukee Brewers the lead in the eighth inning against the Colorado Rockies at American Family Field on July 24, 2022. (Photo by John Fisher/Getty Images)

MILWAUKEE - Andrew McCutchen's tiebreaking, two-run double capped a two-out rally in the eighth inning that gave the Milwaukee Brewers a 10-9 victory over the Colorado Rockies on Sunday.

Colorado's Alex Colomé (2-3) came in to protect an 8-7 lead and retired the first two batters he faced before the Brewer broke loose.

After Christian Yelich walked and Willy Adames singled, Rowdy Tellez hit a 3-2 cutter into right for a tying single that put runners on the corners. Colomé then worked the count full to McCutchen, who hit a four-seam fastball over the head of center fielder Yonathan Daza to bring in both runs.

Colorado, which had erased deficits of 3-0 and 5-2 earlier in the day, nearly came all the way back again.

Brewers closer Josh Hader struck out the first two batters in the ninth, but Garrett Hampson hit a two-out triple off the center-field wall and scored on Daza's bloop hit to right. That put the tying run on first for Kris Bryant, who had gone 3 of 4 with a homer and double up to that point.

Bryant hit a weak grounder that Hader initially bobbled before getting control of it and tossing it to first for the final out. Hader recorded his 28th save in 30 opportunities.

Hunter Renfroe homered for the third straight day and Tyrone Taylor also went deep as the NL Central leaders beat the Rockies for the eighth straight time. The Brewers had lost seven in a row to the Rockies before this stretch.

The Rockies wasted another strong performance from Elias Díaz, who drove in three runs to continue his surge. Díaz has gone 12 of 25 over his last six games and has two hits in each of them.

Brent Suter (3-3) worked his way out of a two-on, none-out jam in a scoreless eighth inning to earn the win.

This game came down to the bullpens because both starting pitchers struggled.

Colorado’s Chad Kuhl had a history of effectiveness against Brewers – the former Pittsburgh Pirates right-hander entered the day 4-2 with a 3.09 ERA the 11 times he’d faced them – but he allowed five runs and lasted just 2 1/3 innings Sunday in the shortest of his 18 starts this season.

The Brewers led 5-2 before Colorado pulled ahead by scoring two runs each in the fifth, sixth and seventh innings. Bryant started the comeback.

Taylor's pinch-hit homer tied it at 6 in the sixth, but Díaz hit a bases-loaded single off Brad Boxberger in the seventh to drive in two runs and give Colorado an 8-6 edge. Milwaukee made it 8-7 when McCutchen and Mike Brosseau opened the bottom of the seventh with back-to-back doubles.

Brosseau’s double made him 7 of 11 as a pinch-hitter this season.

Brewers RHP Freddy Peralta threw 33 pitches and worked two innings for Triple-A Nashville on Sunday in the 2020 All-Star’s first rehabilitation assignment. He struck out three and allowed one run, one hit and one walk.

Peralta hasn’t pitched in the majors since May 22 due to a right lat strain.

RHP Luis Perdomo followed Peralta and needed just 11 pitches to strike out the side in one inning fo Nashville. Perdomo is recovering from an elbow injury and last pitched for the Brewers on May 2.

Kyle Freeland (4-7, 4.96 ERA) starts for the Rockies and Aaron Ashby (2-7, 4.57) pitches for the Brewers as this four-game series concludes Monday with a matchup of left-handers. Ashby will be pitching for the first time since signing a five-year contract worth $20.5 million on Saturday.