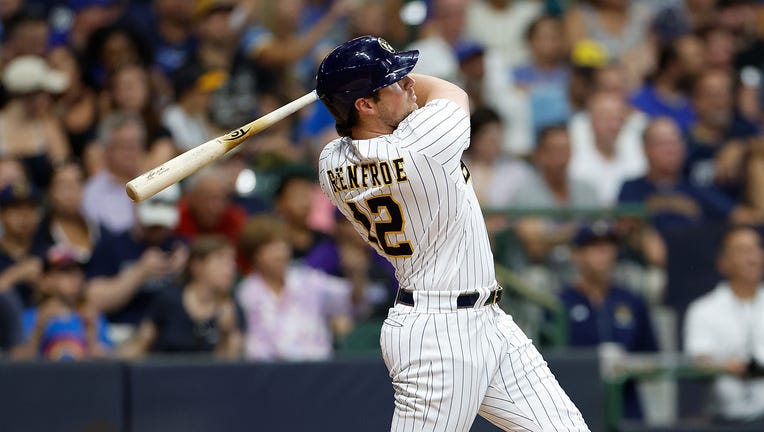 Hunter Renfroe of the Milwaukee Brewers hits a three-run homer against the Colorado Rockies at American Family Field on July 23, 2022. (Photo by John Fisher/Getty Images)

Woodruff (8-3) improved to 3-0 with a 2.20 ERA in five starts since coming off the injured list June 27. He had a right ankle sprain and Raynaud’s Syndrome, which affected his pitching fingers.

The right-hander allowed a run on six hits, struck out eight and walked one to help the Brewers extend their winning streak against the Rockies to a franchise-best seven games.

Renfroe and the Brewers finally got to Rockies starter and former teammate José Ureña (1-2) in the fourth. Andrew McCutchen walked and Kolten Wong singled before Renfroe crushed a 98 mph sinker 424 feet to left-center.

Renfroe also hit a two-run homer in the 10th inning Friday night that tied the game at 5.

Milwaukee broke it open with five runs in the sixth.

Wong chased Ureña with an RBI single. Renfroe greeted Jhoulys Chacín with a slow roller to third that went for an infield single to load the bases. Victor Caratini smacked a two-run double, and Renfroe scored on a wild pitch. Christain Yelich added a run-scoring single.

Tyrone Taylor tacked on an RBI single for Milwaukee in the eighth.

Ureña struck out a season-high five, including Yelich three times, but came up short in his bid for consecutive wins in his third career start for the Rockies. He allowed five hits over six shutout innings and beat the Pittsburgh Pirates 2-0 in his previous outing on July 16.

Ureña was designated for assignment by the Brewers on May 9 after four relief appearances. The Rockies signed him to a minor league deal May 16 and then selected his contract from Triple-A Albuquerque on July 6.

C.J. Cron led off the Colorado ninth with his team-leading 22nd home run, off Connor Sadzeck. Yonathan Daza hit his first home run of the season, a two-run shot.

Brendan Rodgers had an RBI single for the Rockies in the first.

Rockies: RHP Antonio Senzatela was nailed by Yelich's line drive in the first inning Friday. Senzatela recovered and threw to first base for the out. After an injury delay, he stayed in the game. "He’s got a big bruise," manager Bud Black said. "You don’t see a bruise on your stomach a lot, but he has one. He’s going to be fine. He’s going to make his next start Wednesday."

Brewers: INF/OF Jace Peterson was placed on the 10-day injured list, retroactive to July 20, with a left elbow strain. … RHP Justin Topa (right forearm) was sent to the rookie-level Arizona Complex League on a rehab assignment.