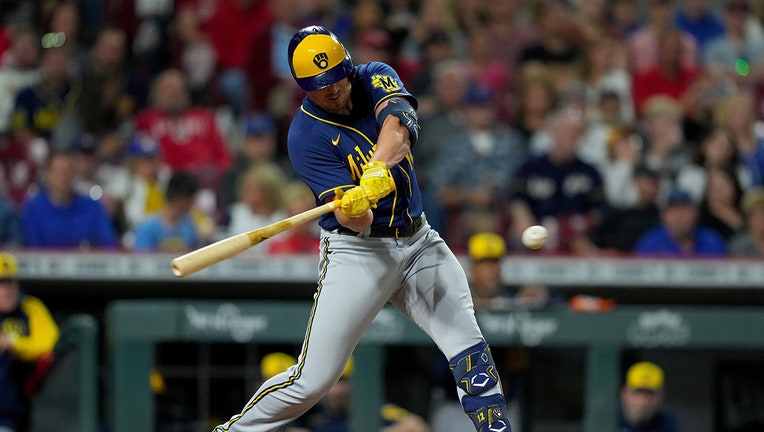 CINCINNATI - Hunter Renfroe hit a pair of two-run homers and drove in a season-high five runs, leading the Milwaukee Brewers to their fourth straight win, 10-2 over the Cincinnati Reds on Saturday.

Renfroe’s shots boosted Milwaukee’s homer count against the Reds this season to 42, tied with the 2016 Cubs for the most by any team against Cincinnati in franchise history.

The Brewers (82-70) went into the game second in the NL Central, 7 1/2 games behind the Cardinals, and fourth in the wild-card race. Milwaukee was two games behind San Diego for the third and final slot; the Padres were playing at Colorado.

Milwaukee has won four straight for the first time since July 26-30.

Renfroe tied his career high with four hits in support of Corbin Burnes (11-8). The reigning Cy Young Award-winner gave up four hits and two runs with three walks and eight strikeouts in 6 1/3 innings.

The Brewers have outscored the slumping Reds 20-6 in the first three games of the four-game series. Cincinnati (59-93) is a season-high 34 games under .500.

Renfroe blasted a Graham Ashcraft 3-2 pitch into the second deck in left field for a 2-1 lead in the fourth. The shot was Renfroe’s 26th of the season and first since Sept. 9 at Colorado.

Omar Narváez and Tyrone Taylor added back-to-back RBI singles as Milwaukee sent nine batters to the plate in the inning.

The Reds activated Ashcraft (5-4) from the injured list (right biceps soreness) for his first start since Aug. 19. The Brewers tagged the rookie right-hander for eight hits and four runs with two strikeouts in four innings.

Brewers: CF Tyrone Taylor ran face first into the wall tracking down Matt Reynolds’ leadoff drive in the second. Taylor held on to the ball and was limping slightly, but he stayed in the game.

Reds: Spencer Steer was hit on his right (back) foot by a Taylor Rogers pitch in the eighth. Steer stayed in the game. … RHP Art Warren had his ulnar collateral ligament repaired but not reconstructed, manager David Bell said on Saturday.

LHP Nick Lodolo (4-7, 3.90) allowed five hits and two runs with 11 strikeouts and no walks over eight innings in Cincinnati’s 8-2 win at Milwaukee on Sep. 9. RHP Freddie Peralta 4-3, 3.45) will make his first appearance since May 23. He’s been sidelined with right shoulder inflammation.