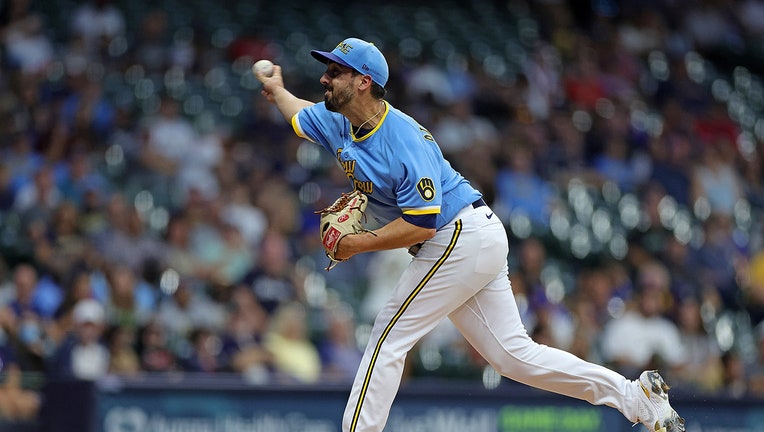 Jason Alexander pitches during the first inning against the Cincinnati Reds at American Family Field on Sept. 9. (Photo by Stacy Revere/Getty Images)

Friedl hit an 0-2 pitch for his first career leadoff home run. Jonathan India hit the next pitch for a stand-up triple and scored on Kyle Farmer’s single. Jake Farley was hit by a pitch, then boos followed an RBI single Donovan Solano that put the Reds up 3-0.

After Aristides Aquino walked to load the bases, Milwaukee – fighting for a wild-card spot – recorded its first outs by turning a double play, but a run scored to put the Reds up 4-0. Alexander appeared to yell into his glove after an RBI single by Jose Barrero made it 5-0.

In contrast, Lodolo needed only nine pitches to retire the first three batters in the first inning, striking out two of them.

Tyrone Taylor hit his 16th home run of the season, a two-run shot off Lodolo in the third inning, to cut the Reds’ lead to 5-2.

After hitting Taylor with a pitch in the fifth, Lodolo retired nine straight.

The Reds extended their lead to 8-2 in the ninth inning with a two-run home run by India and a solo homer by Fraley off Brent Suter.

The Reds have their first three-game winning streak since winning five in a row from July 30 to Aug. 2.

Brewers: RHP Freddy Peralta (right shoulder inflammation) was placed on the 15-day IL. The 2021 All-Star left during the third inning of his start Thursday due to fatigue in the shoulder. … Recalled RHP Justin Topa from Triple-A Nashville. He came on in relief of Alexander in the sixth. … OF Jonathan Davis (elbow) began a rehab assignment at Class-A Wisconsin.

Reds RHP Chase Anderson (0-2, 12.6 ERA) faces Brewers RHP Adrian Houser (5-9, 4.83 ERA) on Saturday in the second of the three-game series. Anderson makes his third start since the Reds signed him as a free agent to a minor league contract on Aug. 27. Houser gave up one earned run in five innings in his previous start, Monday at Colorado.