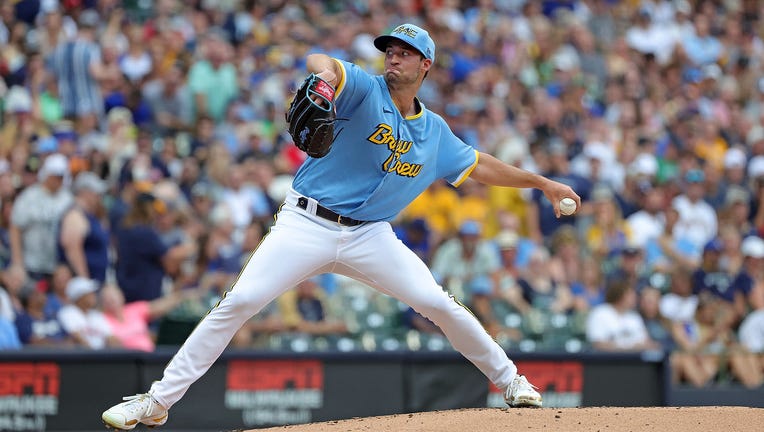 Aaron Ashby of the Milwaukee Brewers pitches against the Cincinnati Reds at American Family Field on Aug. 06, 2022. (Photo by Stacy Revere/Getty Images)

Joey Votto and Donovan Solano each had a solo homer for the Reds, who hadn’t scored more than three runs since an 8-2 win July 30 over Baltimore.

Milwaukee fell a game behind the St. Louis Cardinals, who blanked the New York Yankees 1-0 for their sixth consecutive victory.

With the Reds leading 2-0 in the fourth inning, Barrero launched a two-run homer into the Brewers' bullpen off starter Aaron Ashby (2-10).

The third-year shortstop added a solo shot into the Milwaukee bullpen in the sixth off reliever Hoby Milner, extending Cincinnati's lead to 5-3.

The homers came in the 125th and 126th at-bats of Barrero’s career. They were the first two hits this season for Barrero, who was recalled from Triple-A Louisville on Wednesday.

Milwaukee scored twice off reliever Hunter Strickland in the ninth to make it 7-5, but squandered two good chances when the game was closer.

Trailing 4-3 in the fifth, the Brewers loaded the bases with one out against rookie starter Nick Lodolo. The left-hander struck out Mike Brosseau before righty Buck Farmer (1-1) retired Hunter Renfroe to end the inning.

Down 5-3 in the sixth, Milwaukee had two runners on with two outs when right fielder Aristides Aquino threw out Victor Caratini at the plate on Christian Yelich's single.

Andrew McCutchen hit a solo homer and Keston Hiura had a two-run shot for Milwaukee in the fourth.

McCutchen also had a sacrifice fly in the ninth.