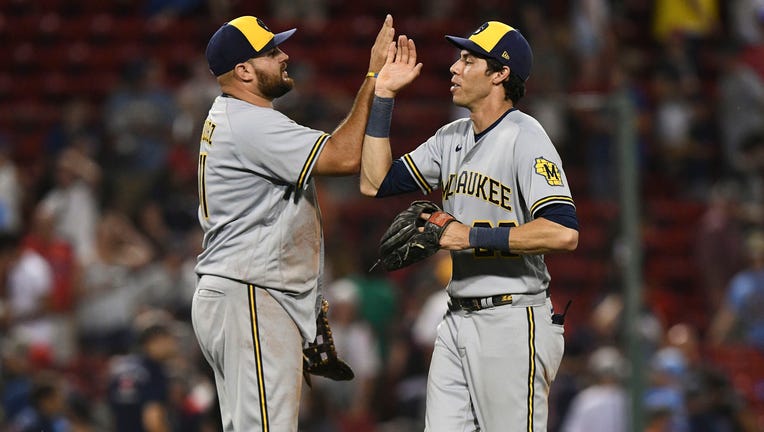 Rowdy Tellez and Christian Yelich of the Milwaukee Brewers high-five after beating the Boston Red Sox at Fenway Park on July 29, 2022. (Photo by Brian Fluharty/Getty Images)

BOSTON - Christian Yelich drove in the go-ahead run with a single in the seventh inning, Brandon Woodruff struck out nine and the Milwaukee Brewers returned to Boston for the first time in eight years and beat the Red Sox 4-1 on Friday night.

Andrew McCutchen had a run-scoring fielder's choice and Tyrone Taylor added a sacrifice fly in the ninth. The Brewers improved to 6-1 since the All-Star break and won in their first game at Fenway Park since completing a three-game interleague sweep in April 2014.

The game was scoreless until the sixth when the Brewers finally got to rookie Brayan Bello (0-3) in an extended relief outing he was initially set to start. Boston manager Alex Cora made a game-day shuffle in the rotation by bumping Bello, who struggled through his first three career starts, to the bullpen and starting lefty Austin Davis instead.

Davis gave Boston two solid innings, then Bello managed to get himself out of a couple of jams over a three-inning stretch until the Brewers finally broke through in the sixth and seventh.

Yelich led off the sixth with a double and scored on McCutchen's fielder's choice for the game's first run, then the Brewers took a 2-1 lead in the seventh after Tyrone Taylor lined a two-out triple to Fenway Park's dreaded triangle in center field. Ryan Brasier came out of the bullpen to face Yelich, who drove the first pitch he saw for a single to left. The run was charged to Bello, who went 4 1/3 innings and allowed two runs and four hits. He walked three, one intentionally, and struck out four.

Boston threatened in the eighth with two men on and one out, but Devin Williams got Bogaerts swinging one night after he blasted a three-run homer late in a 4-2 win over Cleveland.

Woodruff (9-3) went 6 1/3 innings, allowing one run and four hits and two walks. He retired 11 straight batters from the third, when he struck out the side, until the sixth, when Christian Vázquez lined a two-out double to center. Verdugo followed with a double to left just out of Yelich’s reach at the base of the Green Monster to tie the score 1-all.

Brad Boxberger replaced Woodruff with one out in the seventh after Boston got two on with one out. Franchy Cordero hit a one-out single and Bobby Dalbec drew a walk. Boxberger got Jackie Bradley Jr. swinging, then Yolmer Sánchez hit a soft pop-out to short.

Josh Hader struck out three in the ninth to pick up his 29th save.

Bello started by hitting Tyrone Taylor with a 3-2 pitch, then got Yelich swinging and picked up two more strikeouts in the fourth. He walked back-to-back batters with one out in the fifth, but got out of the jam when he got Tyrone Taylor to ground into a double play.

Hunter Renfroe, who drove in 96 runs for the Red Sox last season, got a short but warm welcome in his return to Boston.

The Red Sox ditched their alternate yellow jerseys after donning them for four straight games in a 2-2 split against Cleveland. Boston is 7-2 this season in yellow but went with red jerseys Friday night instead of their traditional all-white home uniforms.

Red Sox: 2B Trevor Story was scheduled to see a hand specialist Friday for soreness he’s still feeling more than two weeks after getting hit on the right wrist with a pitch. Cora said Story felt his recovery wasn’t progressing as quickly as he hoped. "He still feels it when he hits. He doesn’t feel it when he throws," Cora said. ... LHP Rich Hill (sprained left knee) will be activated next week when the Red Sox visit Houston in a three-game series starting Monday, Cora said. Hill made a rehab start with Double-A Portland on Thursday, striking out five and allowing one run in three innings. ... Signed SS Jose Peraza to a minor-league deal. Peraza played 34 games for Boston in 2020.