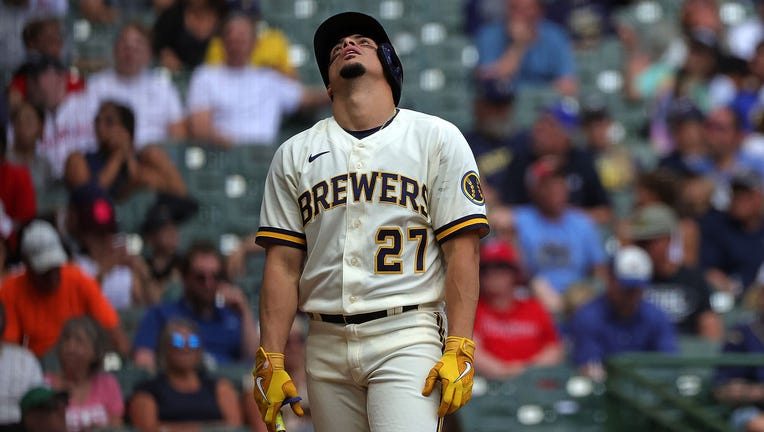 Willy Adames of the Milwaukee Brewers reacts to a pitch against the Philadelphia Phillies at American Family Field on June 09, 2022. (Photo by Stacy Revere/Getty Images)

The NL Central-leading Brewers lost their season-worst sixth in a row.

It was the second consecutive three-game sweep for the Phillies under Thomson. He took over last Friday after manager Joe Girardi was fired, and Philadelphia swept the Los Angeles Angels before heading to Milwaukee.

Didi Gregorius singled, tripled, doubled and drove in a run for Philadelphia.

Andrew McCutchen singled home a run in the ninth to pull Milwaukee within five runs. With two on, Jace Peterson then was initially ruled safe on an RBI single, but was called out after a replay reversal.

Reigning NL Cy Young Award winner Corbin Burnes (3-4) and Phillies starter Zach Eflin were both out of the game by the end of the fifth.

Harper homered for the second straight day, connecting off Brad Boxberger for his 15th of the season, a solo drive in the seventh for a 4-2 lead.

Seranthony Dominguez (3-1) pitched one inning for the win.

Eflin walked three to snap his streak of 33 consecutive starts with two walks or fewer since Aug. 29, 2020. He allowed a run and four hits in four innings.

Burnes walked a career-high four and gave up three runs, one of them earned, and three hits in 4 1/3 innings. He struck out eight and left after throwing a season-high 113 pitches.

Phillies: RHP Zack Wheeler is scheduled to come off the paternity list and start Saturday’s game against the Arizona Diamondbacks.

Brewers: Adames started at short for the second straight game after being reinstated Friday from the 10-day injured list (high left ankle sprain). He went 0 for 4 with three strikeouts in his return. … Christian Yelich batted first for the second consecutive game.