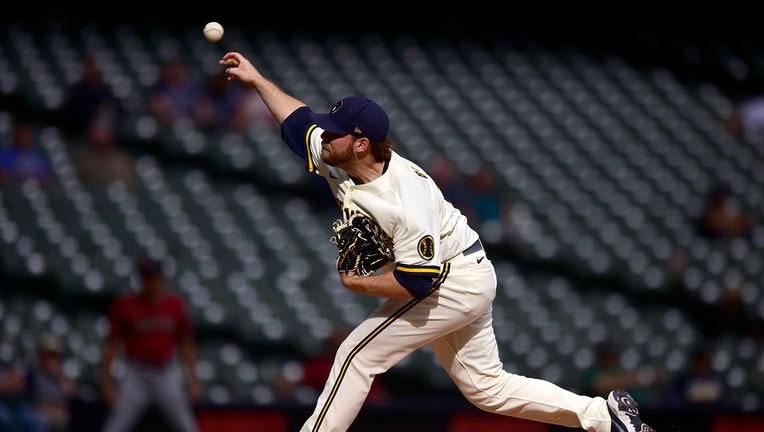 MILWAUKEE, WISCONSIN - OCTOBER 05: Corbin Burnes #39 of the Milwaukee Brewers throws a pitch during the first inning against the Arizona Diamondbacks at American Family Field on October 05, 2022 in Milwaukee, Wisconsin. (Photo by Kayla Wolf/Getty Ima

MILWAUKEE - Josh Rojas and Corbin Carroll hit back-to-back home runs in the ninth inning and the Arizona Diamondbacks beat the Milwaukee Brewers 4-2 Wednesday to close out the season.

Arizona starter Merrill Kelly struck out seven over six innings as he surpassed the 200-inning mark for the first time in his career. He allowed one run and four hits.

Rowdy Tellez hit his team-leading 35th home run, breaking a 1-1 tie with a solo drive in the Milwaukee eighth off Sean Poppen (2-2).

Christian Walker led off the Arizona ninth with his third hit and Rojas homered off Trevor Gott (3-3). Carroll followed with his fourth homer of the season.

Kevin Ginkel worked a perfect ninth for his first save.

After losing 110 games to tie Baltimore for baseball’s worst record a year ago, the Diamondbacks improved to 73-88 in 2022.

Milwaukee finished 87-75, down from 95-67 last season, when the Brewers won the NL Central before falling to the eventual World Series champion Braves in the NL Division Series.

With neither team advancing to the postseason, they’ll return to game action on Feb. 25 when the Brewers host the Dodgers in spring training and Diamondbacks face the Rockies to open Cactus League play in Arizona.