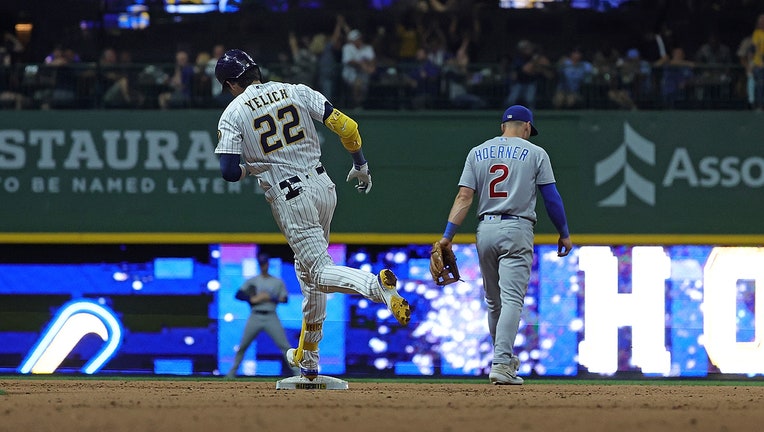 Christian Yelich runs the bases following a home run against the Chicago Cubs on Aug. 27. (Photo by Stacy Revere/Getty Images)

After Woodruff and Chicago’s Drew Smyly kept the game scoreless through six innings, the Brewers broke through in the bottom of the seventh with four runs off reliever Rowan Wick (4-7).

Yelich followed by sending a 2-2 pitch over the wall in the right-field corner. The homer was Yelich’s 10th of the season, but just his second since July 2. He also went deep Aug. 16 in a 5-4, 11-inning victory over the Los Angeles Dodgers.

Yelich also singled in the third, fifth and eighth innings for his first four-hit game since he hit for the cycle in a 14-11 loss at Cincinnati on May 11.

Kolten Wong added a solo shot and Willy Adames hit a two-run blast off Michael Rucker in the eighth.

Woodruff struck out 10 and allowed four hits and one walk. His outing ended after a shot from Franmil Reyes with a 110-mph exit velocity appeared to hit him in the lower leg or foot, though first baseman Rowdy Tellez fielded the ball and retired the batter.

This marked the second straight night a Brewers starter departed after holding the Cubs scoreless through six innings. Freddy Peralta had a no-hitter going Friday when he was removed at the start of the seventh inning of a game the Brewers eventually lost 4-3 in 10.

Taylor Rogers (2-6) struck out three batters in the seventh, ending the inning by retiring Morel with a runner on second. Cubs first base coach Mike Napoli was ejected after arguing the third-strike call on Morel.

Smyly struck out two and allowed five hits and one walk for Chicago to continue his outstanding August. The veteran left-hander has given up just three earned runs over 30 innings in five August starts.

Cubs: INF Patrick Wisdom went on the injured list, retroactive to Friday, with a sprained left ring finger. INF Alfonso Rivas was recalled from Triple-A Iowa. Manager David Ross said Justin Steele was feeling fine one day after the left-hander left a start one out into the sixth inning with tightness in his lower back.

Brewers: RHP Trevor Rosenthal’s status for the rest of the regular season is in jeopardy after he injured his lat in a rehabilitation appearance with Triple-A Nashville. Manager Craig Counsell said Rosenthal’s injury is similar to the issue that kept RHP Freddy Peralta on the injured list for over two months earlier this season. ... OF Jonathan Davis (right elbow effusion) went on the 10-day injured list and C Alex Jackson (left wrist inflammation) went on the 60-day injured list). The Brewers selected OF Garrett Mitchell from Triple-A Nashville. The Brewers chose Mitchell out of UCLA with the 20th overall pick in the 2020 draft.

RHP Adrian Sampson (1-4, 4.04 ERA) starts for the Cubs and LHP Eric Lauer (9-5, 3.44) pitches for the Brewers in the final matchup of the season between these two NL Central rivals.