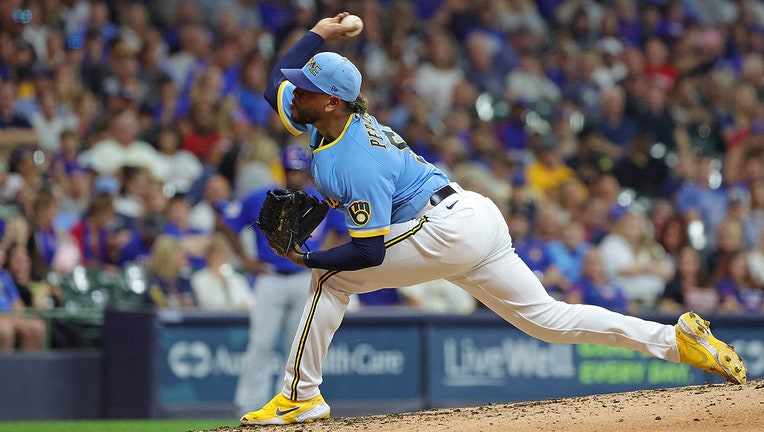 Freddy Peralta throws a pitch during the fifth inning against the Chicago Cubs at American Family Field on Aug. 26. (Photo by Stacy Revere/Getty Images)

MILWAUKEE - Ian Happ hit two two-run homers for Chicago's only hits, and the Cubs beat the Milwaukee Brewers 4-3 in 10 innings on Friday night.

Happ hit a drive off Matt Bush in the seventh and a tiebreaking shot against All-Star Devin Williams (4-3) in the 10th. Both homers sailed over the right-field wall.

Milwaukee's Rowdy Tellez tied the game with a leadoff homer in the ninth off Brandon Hughes, but the Brewers squandered opportunities to close it out in the ninth and 10th.

Milwaukee had runners on first and second in the ninth after Keston Hiura reached on an error by shortstop Nico Hoerner and Luis Urías walked, but the Brewers couldn’t get the winning run across. Mark Leiter Jr. got Victor Caratini to fly to left, and Sean Newcomb (2-0) retired Kolten Wong and Christian Yelich.

The Brewers got a one-out RBI single from Hunter Renfroe in the 10th that cut Chicago’s lead to 4-3 and put runners on first and second. The runners advanced on a wild pitch, and a Tellez walk loaded the bases.

Pinch-hitter Jace Peterson then sent a grounder to second baseman Nick Madrigal, who tagged Tellez out and threw to first to complete the game-ending double play.

The Brewers went 2 for 15 with runners in scoring position.

Manuel Rodríguez earned the save in his first appearance of the season. Rodríguez, who has been dealing with an elbow issue, was activated from the 60-day injured list earlier in the day.

Madrigal led off the seventh with a grounder to third baseman Urías, who misplayed the ball for an error. One out later, Happ sent a 3-2 pitch from Bush over the right-field wall for a 2-1 lead.

Chicago continued its reversal of fortune in this NL Central rivalry.

The Cubs are 10-7 against the Brewers this season after losing 15 of 19 meetings in last year's season series. Nine of the matchups have been decided by one run, and the Cubs are 7-2 in those games.

Milwaukee has slid out of playoff position after leading the NL Central for much of the year in part because of its struggles against the bottom three teams in the division. The Brewers are 3-12 in their last 15 matchups with the Cubs, Cincinnati Reds and Pittsburgh Pirates.

The news wasn’t all good for the Cubs.

Justin Steele, one of the NL’s hottest pitchers, left with lower back tightness after retiring Renfroe on a fly to the warning track to start the bottom of the sixth. Steele struck out six, walked four and allowed four hits, including a Tyrone Taylor homer in the fifth.

In his last six starts, Steele has allowed just three earned runs over 31 2/3 innings. He entered Friday’s game with a 1.47 ERA since June 29 to lead all NL starters over that stretch.

The Cubs' victory gave them a 208-207 lead in the all-time series between the teams.

Brewers: RHP Trevor Rosenthal, who hasn’t pitched since 2020, is getting examined after leaving his last rehabilitation assignment early with lat soreness. The Brewers acquired Rosenthal from the San Francisco Giants at the trade deadline and have been hoping he could join their bullpen for the final month of the season. … Peterson was activated from the injured list. He hadn't played since July 17 due to an elbow issue.