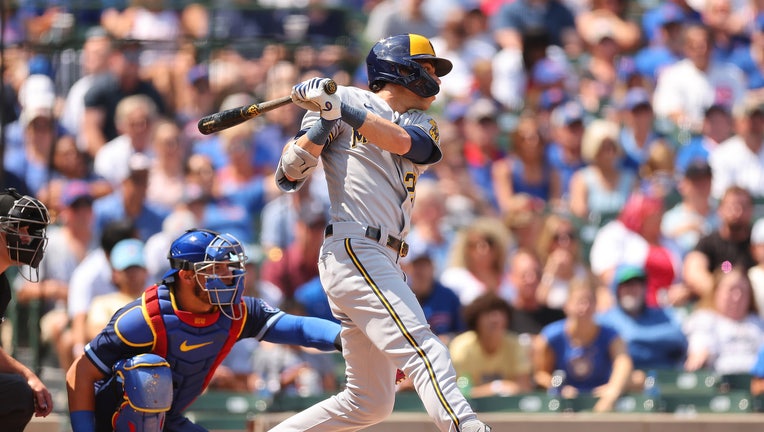 CHICAGO - Rookie Christopher Morel and Patrick Wisdom each hit a two-run homer and the Chicago Cubs topped the Milwaukee Brewers 8-7 on Friday for their fourth straight win.

Morel’s drive down the left-field line in the sixth inning put the Cubs ahead for good in a seesaw game on a warm day with the wind blowing out at Wrigley Field. Nick Madrigal had three hits and scored two twice for Chicago.

Morel rebounded with a timely swing after making a throwing error from shortstop in the top of the inning.

"That felt really good," Morel said through a translator. "I wasn't able to help our the team there with that error defensively, but just to be able to help them out offensively, help us get the win, it felt good."

Then the Cubs and their bullpen held on through the last three innings, despite a perfect setting for a rollicking, high-scoring affair.

"Well, it's fun when you take the lead back," Cubs manager David Ross said. "We've seen those days a lot over the years. I loved the approach of the offensive early on."

Milwaukee’s Andrew McCutchen connected for his third homer in two days, and Hunter Renfroe launched a majestic two-run drive off the video board in left.

Rowdy Tellez added a solo shot for the Brewers, who entered three games behind first-place St. Louis in the NL Central and one game out of the final NL wild-card spot.

Franmil Reyes tripled in a run, giving him hits in all nine games with the Cubs since they claimed him off waivers from Cleveland on Aug. 8. The 27-year-old designated hitter his hitting .368 with Chicago and has extra-base hits in six of those games, with two homers, two triples and three doubles.

"This new opportunity, there's many players who don't have a second chance," Reyes said. ‘I’m very blessed. The last couple of days in Cleveland, I was turning the page around. I was doing better. Coming here, I just had the same plan."

Hoby Milner (3-2), surrendered Morel’s 12th homer on a 1-2 pitch with two outs in the sixth and took the loss.

"You know that with the conditions today that things are going to happen," Brewers manager Craig Counsell said. "He threw a whole bunch of good pitche and then made one bad pitch."

Milwaukee starter Aaron Ashby allowed six runs on eight hits in five innings, but the lefty struck out eight and walked none.

McCutchen’s two-run shot to left-center in the first put Milwaukee ahead.

The Cubs bounced back to take a 3-2 lead in the bottom half on Seiya Suzuki’s double, Reyes’ triple and Ian Happ’s infield single.

The Brewers took a 5-4 lead in third on Tellez’s 25th homer and Renfroe’s 22nd drive.

Wisdom’s 22nd homer put Chicago ahead 6-5 in the fifth. After the Brewers scratched out two runs the sixth to take a 7-6 lead, but Morel connected in the bottom half.

"We answered back, which I think was important," Counsell said. ’We gave ourselves a lead, just the last couple of innings we weren't able to get anything going."

Thompson dashed off the mound and across the third-base line to catch Tellez’s popup in the first. The pitcher was the closest to the ball after the Cubs infielders shifted to the right side of the diamond against the Brewers lefty.

Brewers: C Omar Narváez (left quadricep strain) should return from his rehab assignment at Triple-A Nashville on Saturday, manager Craig Counsell confirmed before Friday’s game. Narváez has been out since Aug. 3 and Counsell plans to "ease" him back into action. .. INF/OF Jace Peterson (left elbow sprain) participated in pregame on-field baseball activities, but is still having discomfort swinging a bat and remains on the IL. He’s been out since July 17.

Cubs: Manager David Ross said RHP Kyle Hendricks will soon report to the team’s training facility in Arizona as he rehabs a right shoulder strain. Hendricks went on the IL on July 6.