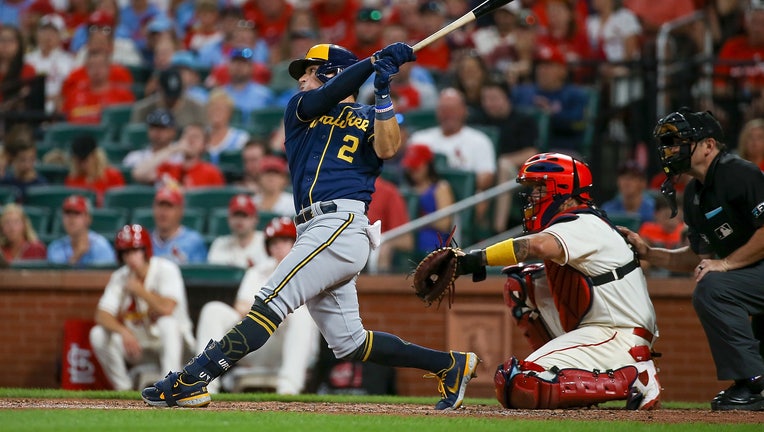 Luis Urias hits a solo home run in the eighth inning against the St. Louis Cardinals on Aug. 13. (Photo by Scott Kane/Getty Images)

ST. LOUIS - Hunter Renfroe tripled home the go-ahead run in the 10th inning, and the St. Louis Cardinals wasted a magnificent start by Adam Wainwright, falling 3-2 to the Milwaukee Brewers on Saturday night.

Wainwright took a no-hitter into the seventh inning and ended up finishing nine, allowing one run on three hits with eight strikeouts in his 109-pitch outing.

The Cardinals handed their 40-year-old ace a 1-0 lead in the seventh inning on Nolan Gorman's line-drive double to left-center against Milwaukee starter Corbin Burnes. Paul Goldschmidt, who led off the inning with a single, scored from first as the ball eluded center fielder Tyrone Taylor.

But Wainwright allowed Luis Urías, one-out, first-pitch homer to center in the eighth, and Devin Williams (4-2) retired the side in order in the ninth.

In the 10th, Renfroe led off with a triple to right against Giovanny Gallegos (2-5), scoring automatic runner Andrew McCutchen. He later scored on Kolten Wong's sacrifice fly.

Matt Bush allowed Dylan Carlson's sacrifice fly in the 10th but struck out the next two batters for his third save.

Burnes, last year's NL Cy Young Award winner, allowed four hits with six strikeouts in seven innings. He worked seven scoreless innings in each of his previous starts against the Cardinals this season.

McCutchen broke up Wainwright's no-hit bid with a two-out single in the seventh. The Brewers finished with four hits.

Wainwright worked nine innings for the second time this season without winning either game. He went the distance in a 2-0 loss to Philadelphia on July 8.

Wainwright's previous start was his worst of the season. He yielded six runs while throwing 111 pitches over four-plus innings against the New York Yankees last Sunday.