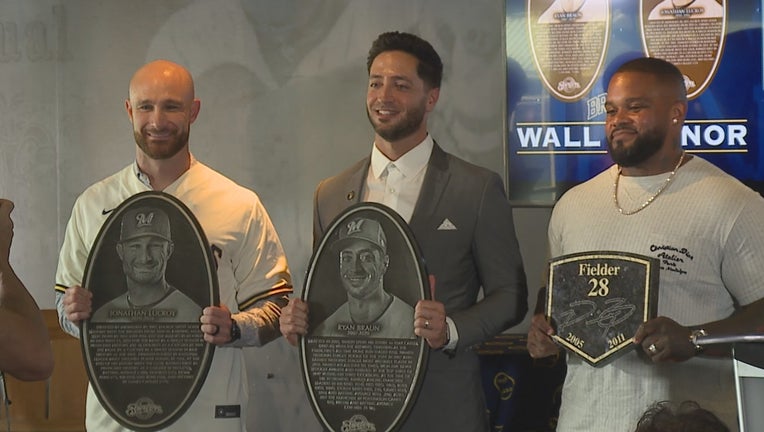 MILWAUKEE - Only a select few can come home to American Family Field and see their names and faces sprawled around the ballpark.

"Just being associated with these guys right here and everyone else within this room, I'm very humbled and thankful for this opportunity and this privilege," said Jonathan Lucroy.

Former general manager Doug Melvin says he owes a lot to them.

"You made my career a lot better," said Melvin. "Probably kept my job a little longer. But I loved having you. You were exciting. I loved the teamwork that you brought to the team."

Melvin recalled drafting Braun and not wanting to rush any player through the minors.

He visited West Virginia to see the future MVP and said it was only a matter of time.

"I always believed in my ability to hit," said Braun. "I was always super excited about the opportunity to eventually get here and prove myself here. I think, you know, for all of us, it's nice to have success in the minor leagues, but the goal is always like, let me get there. Let me try to prove myself at the level where it actually matters."

Braun proved himself with his clutch at-bats and Lucroy did the same off the field.

"The amount of time you spent with our pitchers, some of whom were very young," said Brewers President of Baseball Operations David Stearns. "Some of whom you must have known at the time, probably didn't have a long major league career ahead of them. You cared so much for those guys that stuck through me through all this. You should be really proud of it."

The baseball journeyman ends his career where it began.

Lucroy, a 2007 third round pick, officially retired as a Brewer.

"I played for 11 different teams," Lucroy said. "But obviously the most memorable and the best time I had was here. And you don't really realize how good you have until you're somewhere else. And so it was pretty amazing for me to be able to, you know, I asked Mark about this last year if I could do it, and he said, Yeah, and I really appreciated that, and I'm thankful."

As for Fielder, who has spent a little more time out of baseball than his former teammates, he is playing it chill.

"I haven't been doing much," said Fielder. "I've been at the house hanging out and watching my boys play driving all across Florida and everywhere else."

The six-time all star says he loves to reminisce and was quick to call out another player from the 2011 NL Central champions.

"A lot of fun times especially with these guys so anytime I get to come back and see you guys, especially Counsell," Fielder said. "It really feels good because I wish I could play for you. That would be fun."

For all three men, they are thankful for a lot of people who have helped them along the way, but none moreso than the fans.

"I think we were all spoiled to play in front of an incredible fan base who inspired and motivated all of us on a daily basis," Braun said.

There are now 21 names on the Brewers Walk of Fame with the addition of Fielder.

After Braun and Lucroy saw their plaques put on the Brewers Wall of Honor, there are now 71 Brewers and 19 Braves.