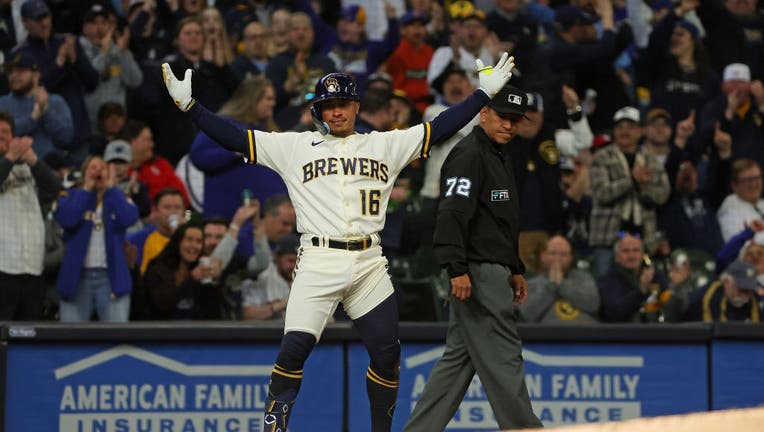 MILWAUKEE, WISCONSIN - APRIL 14: Kolten Wong #16 of the Milwaukee Brewers reacts after hitting a triple in the first inning against the St. Louis Cardinals during Opening Day at American Family Field on April 14, 2022 in Milwaukee, Wisconsin. (Photo

MILWAUKEE - Brandon Woodruff threw five shutout innings and Omar Narváez homered and doubled as the Milwaukee Brewers opened their home schedule with a 5-1 victory over the St. Louis Cardinals on Thursday.

Woodruff struck out two and allowed just three hits and a walk to bounce back from an uncharacteristically poor performance in his first start, a 9-0 loss to the Chicago Cubs.

The two-time All-Star worked 3 2/3 innings in the Cubs game and gave up seven runs, matching a career high. He had opened the loss to Chicago by walking three men and hitting a batter.

Woodruff had no such control problems, throwing 65 of his 89 pitches for strikes. He faced his only serious trouble in the third inning but got out of the bases-loaded jam by retiring Tyler O’Neill on a shallow fly to right.

The Brewers gave Woodruff an early lead and delighted an announced sellout of crowd of 42,794 by scoring four runs in the first three innings off Adam Wainwright (1-1).

Kolten Wong ripped Wainwright’s first pitch for a leadoff triple down the right-field line and came home on McCutchen’s two-out single up the middle.

Milwaukee extended the lead to 2-0 in the second when Narváez ripped an 85-mph cutter from Wainwright over the right-field wall for his first homer since Aug. 11 and first RBI of this season.

The Brewers added two more runs in the third. Christian Yelich hit a leadoff double off the center-field wall and scored on Hunter Renfroe’s two-out single. Narváez followed with a double to left-center that brought home Rowdy Tellez, who had reached on a one-out walk.

Wainwright (1-1) struck out seven and allowed eight hits and two walks in 4 1/3 innings.

Milwaukee added one more run in the sixth as Wong singled home Jace Peterson, who reached with a single and two walks.

The Cardinals’ only run came when Tommy Edman homered off Jandel Gustave in the eighth. Trevor Gott and Gustave each pitched two innings.

Moving up the charts

This marked the 306th regular-season game featuring Wainwright and Yadier Molina as a starting battery, tying former Chicago White Sox teammates Red Faber and Ray Schalk for the third-highest total in major league history. The record is owned by Mickey Lolich and Bill Freehan with 324 starts together.

Albert Pujols, who hasn’t stolen a base since 2015, was on second with one out in the second inning when he took off for third in an apparent attempt to catch Woodruff by surprise.

It didn’t work. Woodruff easily threw Pujols out at third.

Brewers president of baseball operations David Stearns said Luis Urías is "progressing fine" and said there’s a possibility the third baseman could take some controlled at bats in Arizona this weekend. Urías has been running the bases.

Urías hasn’t played yet this season due to a quadriceps issue that has him on the injured list.

"What we need to do is get him to the point where he’s completely confident so that he can play a real game (at full) speed, and we’re just not there yet," Stearns said.

These two teams continue their four-game series Friday night with Miles Mikolas (0-0, 4.91 ERA) starting for the Cardinals and Freddy Peralta (0-0, 6.75) starting for the Brewers in a matchup of right-handers.

FOX6's Digital Team was down at American Family Field watching Brewers fans fire up their grills and crack open some cold ones ahead of the home opener.

The Green Bay Packers and veteran wide receiver Sammy Watkins have agreed to a deal, according to a report from ESPN's Adam Schefter.