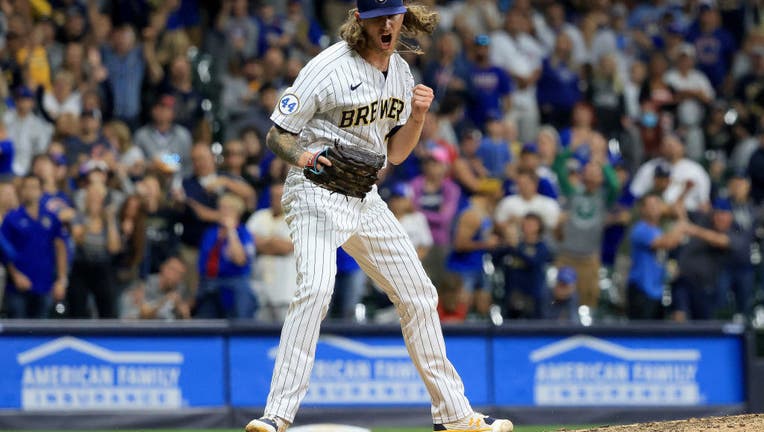 Josh Hader celebrates after a strike out during the ninth inning in the game against the Chicago Cubs at American Family Field on Sept. 18. (Photo by Justin Casterline/Getty Images)

The Brewers won for the seventh time in nine games to ensure themselves at least a wild card after San Diego and Cincinnati lost earlier in the day. Milwaukee's magic number to lock up the NL Central title is three over St. Louis.

NL Cy Young Award contender Corbin Burnes was shaky by his standards in his first start since throwing eight innings in a combined no-hitter a week ago. He allowed three runs and six hits over six innings, striking out 11.

The right-hander gave up Ian Happ's 23rd homer with a man on in the fifth. It was the first homer allowed by Burnes since Aug. 6, when San Francisco's Brandon Belt took him deep.

Piña, Milwaukee’s backup catcher, scored the first run of the night when he sent Justin Steele’s first pitch of the second inning to center. Escobar followed with a solo shot to lead off the third, snapping a 1-1 tie.

Burnes left the game with a 3-2 lead thanks to a solo home run by Peterson to lead off the sixth, but the Cubs tied it an inning later when Willson Contreras, who was robbed of a home run by Lorenzo Cain in the second, tagged Brad Boxberger for a two-out solo shot that made it a 4-4 game.

Piña struck again from the leadoff spot in the eighth, sending an 0-2 slider from Scott Effross (2-1) down the left field line. Kolten Wong added an insurance run later in the inning, driving in Pablo Reyes on an infield single.

Devin Williams (8-2) pitched a scoreless eighth and Josh Hader stranded a pair of runners in the ninth for his 33rd save.

The team store at American Family Field was buzzing after the Brewers beat the Cubs to clinch a postseason berth for the fourth consecutive season.

The Brewers Team Store will take phone orders, ship to house and accommodate in-store pickup. Follow @BrewersTeamStore on Instagram. Orders can be placed by calling 414-902-4750 or emailing TeamStore@Brewers.com.

Cubs: INF Nico Horner arrived in Milwaukee on Saturday and took part in batting practice but won’t be activated until Sunday, ahead of Chicago’s series finale against the Brewers. Horner has been out since late July with an oblique strain. Manager David Ross plans to make Hoerner the everyday starter at shortstop in an effort to evaluate the progress of the 2018 first-round pick who was limited to just 39 games due to injuries this season.

Brewers: OF Avisail Garcia (back spasms) was held out of the lineup for a third straight game. Manager Craig Counsell had hoped to have Garcia back Saturday, but after an evaluation, the medical staff decided Garcia wasn’t at the point they’d hoped.

They may be fierce competitors on the field, but ahead of the Brookfield East-Central game, they're putting their rivalry aside for a good cause.

Packers place OLB Za'Darius Smith on IR due to back issue

The back issue that bothered Green Bay outside linebacker Za’Darius Smith throughout the preseason will now force the Packers to play without their Pro Bowl pass rusher for the next few weeks.