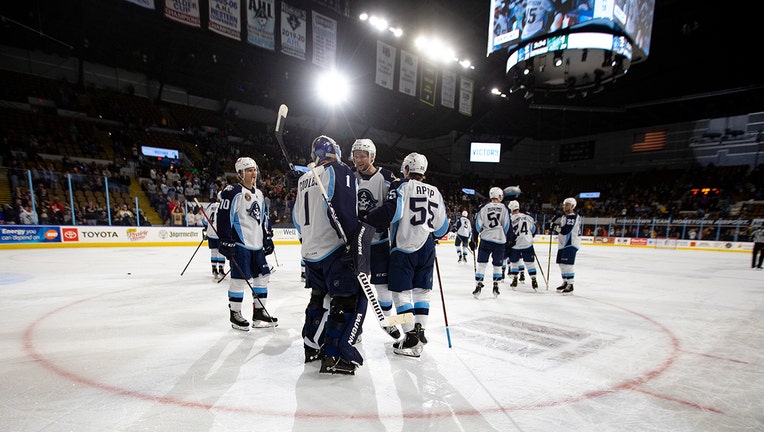 MILWAUKEE - Kiefer Sherwood scored the game-winning goal 1:26 into overtime while Devin Cooley stopped 28 of the 29 shots he faced as the Admirals made life "ruff" on the Iowa Wild in a 2-1 win on Sendik’s "Dog Night" at UW-Milwaukee Panther Arena.

Sherwood’s goal came off a long outlet pass off the boards from Jimmy Huntington. Sherwood came in on Iowa goalie Hunter Jones, faked forehand before slipping a backhand by Jones’ right leg. Adam Wilsby also assisted on the play.

The win was the third straight for Milwaukee, including wins in consecutive days against the Wild to improve their overall record to 10-4 which is good for first place in the division. Cooley stopped 24 shots in the first two periods alone on his way to his fourth win of the season.

The game was scoreless for over 35 minutes before Iowa’s Nick Swaney found a loose puck to the left of Admirals netminder Devin Cooley and lifted it over his paddle with 4:11 to play in the second period.

The Admirals tied the score at one on Jachym Kondelik’s second goal in as many games at the 8:33 mark of the third. With the Admirals applying pressure in the Iowa zone, Roland McKeown swing the puck from right to left along the blue to Marc Del Gaizo, who fired a shot that was deflected halfway to the goal by Kondelik’s and past Jones.

The game would stay knotted at one the rest of regulation and into overtime, setting the stage for Sherwood’s heroics in OT.

Sherwood now shows goals in four consecutive games and has six in seven contests since joining the Admirals on November 4.

The Admirals return to home ice this Tuesday, Nov. 22 when they host the Texas Stars at 7 p.m.