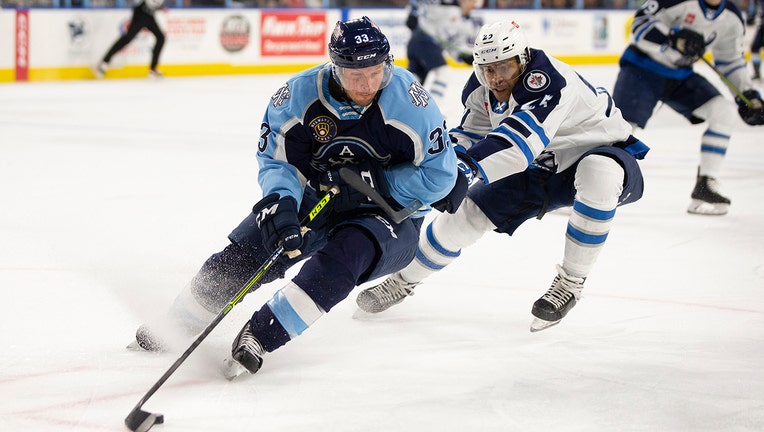 MILWAUKEE - Devin Cooley stopped 43 shots, and Jimmy Huntington scored with 44 seconds to play to break a 1-1 tie and lead the Milwaukee Admirals to a 2-1 home win over the Manitoba Moose on Saturday.

The victory gives the Ads a 2-0 lead in the best-of-five series.

Cooley earned his second win in as many nights and has stopped a combined 83 of the 86 shots he has faced, including 22 in the second period alone on Saturday.

Huntington played the offensive hero in the game, scoring his first playoff goal 43 seconds after the Moose had knotted the score at 1-1 with a goal by Morgan Barron with goalie Mikhail Berdin pulled in favor of an extra attacker.

The play started when Brayden Burke disrupted a play on the far wall in the Moose zone, which followed with Tommy Novak chipping the puck over to Huntington, who proceeded to rip a snapper over the shoulder of Berdin to grab the 2-1 advantage.

The two teams played a tight-checking first two periods where no one was able to find the back of the net, and it was scoreless after 40 minutes of play.

Burke broke the tie just 2:10 into the third period with his second goal in as many nights. The play started when Jeremy Davies intercepted a Manitoba outlet pass and carried the puck into the zone where he dropped it at the point for Burke. Burke skated to the top of the left circle and sent a pass toward Huntington, but the puck deflected off the skate of Moose defender Johnathan Kovacevic and into the net.

This is the first time that the Admirals have held a 2-0 series advantage since the first round in 2009 against Rockford.

The series now shifts to Winnipeg for the remainder of the series when the Admirals try to close out the series in Game 3 on Wednesday, May 11 at 7 p.m.