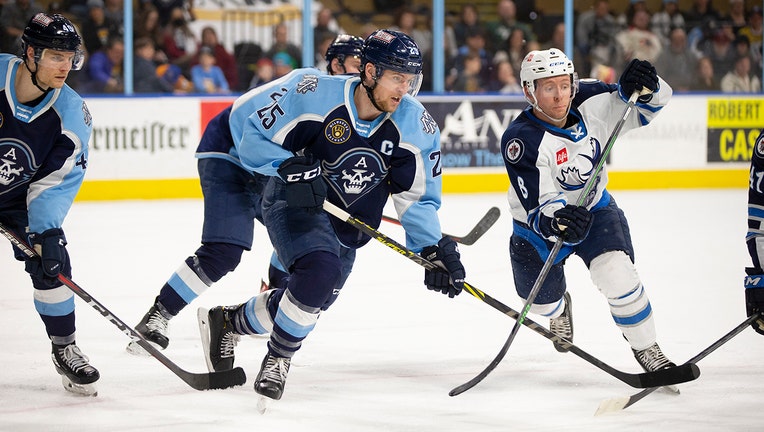 MILWAUKEE - Tommy Novak assisted on all three Admirals goals and Cole Schneider scored the game-winner with less than five minutes to play in regulation as the Ads took game one with a 3-2 win over the Manitoba Moose in their best-of-five Central Division Semifinal match-up.

Schneider broke a 2-2 third period tie off a beauty of an assist from Novak with 4:07 to go in the third. A penalty to Novak had just expired when he exited and went to the Manitoba blueline and was hit with a stretch pass from Cole Smith. Novak and Schneider then went in on Moose goalie Mikhail Berdin 2-on-1. Novak held the puck until the last second before finding Schneider, who went forehand, backhand and tucked the puck around a sprawled Berdin.

Manitoba put the pressure on the rest of the way and pulled Berdin in favor of an extra attacker for the final 1:44, but goalie Devin Cooley and the Ads defense held firm to pull out the win. Cooley stopped 40 shots in total, including 14 in the third period alone, to pick the victory in his first post-season start.

In the first match-up playoff match-up between the two teams since 1999, the Ads and Moose game was scoreless for most of the first two periods before the teams traded three goals at the end of the sandwich frame.

The Ads got on the board first on Brayden Burke’s first career playoff tally with 4:21 to play in the second. With an offensive zone face-off, Jimmy Huntington collected the puck off the draw and bumped it to Novak in the slot. The Manitoba defenders all looked to him and didn’t see Burke go back door, where to took a Novak feed and buried it by Berdin.

However, less than two minutes later the Moose would tie the score at one thanks to a CJ Suess deflection off of a Declan Chisholm shot at the 17:12 mark.

It looked like the score would stay tied going into the third, but Ads defenseman Matt Donovan found the back of the net with just .3 seconds remaining in the frame. With Milwaukee on the power-play, Tommy Novak sent a pass through the seam, to Juuso Parssinen, who one touched out to Donovan for the buzzer-beating one-timer.

Chisholm tied the score at two for the Moose just 46 seconds into the third period, setting the stage for Schneider’s dramatic goal.

The two teams will get right back at it tomorrow night at 6 pm at Panther Arena for game two before the series switches to Winnipeg for game three, and, if necessary, games four and five.