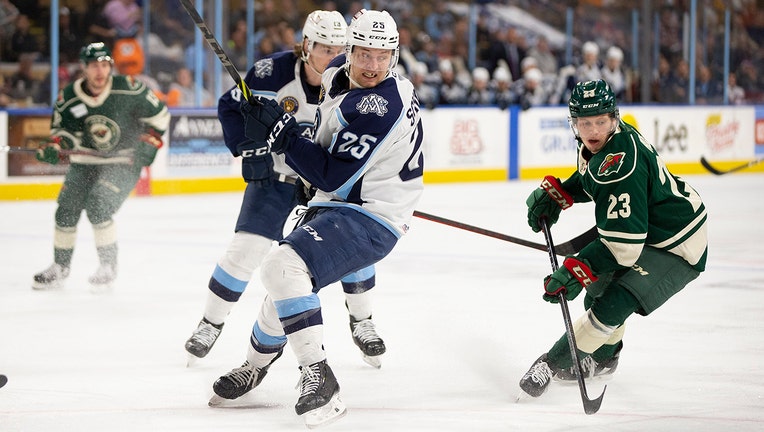 MILWAUKEE - The Milwaukee Admirals punched their ticket to the Calder Cup Playoffs as they earned a point in a 5-4 overtime loss to Iowa at UW-Milwaukee Panther Arena on Saturday, April 16.

The Ads scored three goals in the third period to erase a 4-1 deficit and force the extra session to move their magic number to zero.

Currently in third place in the Central Division, if the playoffs started Saturday, Milwaukee would battle second-place Manitoba in a best-of-five division semifinal series.

The AHL’s regular season ends on April 30, and the Calder Cup Playoffs will begin immediately afterward.

Trailing 4-1 heading into the third period the Admirals scored three times, including two off the stick of Cole Smith, to tie the game and force overtime. The first tally was just 24 seconds into the final frame when Smith scored on this third attempt from directly in front of the net to make it 4-2.

Kole Sherwood made it a one-goal game at the 12:22 mark of the third as he had the puck just in front of the Iowa crease and went backhand to forehand before roofing his fifth goal of the season.

Smith knotted the score with his second of the game and his 20th of the season just 50 seconds after Sherwood’s tally. Smith gathered the puck along the goal line to the left of Iowa netminder Zane McIntyre, took two strides toward the face-off dot and fired a wrister to the far post.

Unfortunately for the Admirals, Joe Hicketts won the game for the Wild when he snuck one by Connor Ingram 1:45 into the extra session.

The Admirals got on the board first on a beautiful pass from Mathieu Olivier to Grant Mismash just 2:30 into the game.

However, the Wild would score the next four goals to take a 4-1 lead after two periods. They tied the score with 8:40 to play in the first when Adam Beckman deflected a Alexander Khovanov shot past Ads goalie Connor Ingram.

Iowa grabbed the lead at 7:41 of the second period, their first of three in the second, when Kyle Rau potted his team leading 22nd of the season. That was followed by goals from Dominic Turgeon at 15:55 and Mitchell Chaffee just 17 seconds later.

The Admirals are off now until April 20 when they host the Texas Stars at 7 p.m.

Playoff basketball is back in Milwaukee and the Bucks are hoping for another NBA Championship. The reigning champs are showing off some new playoff gear.