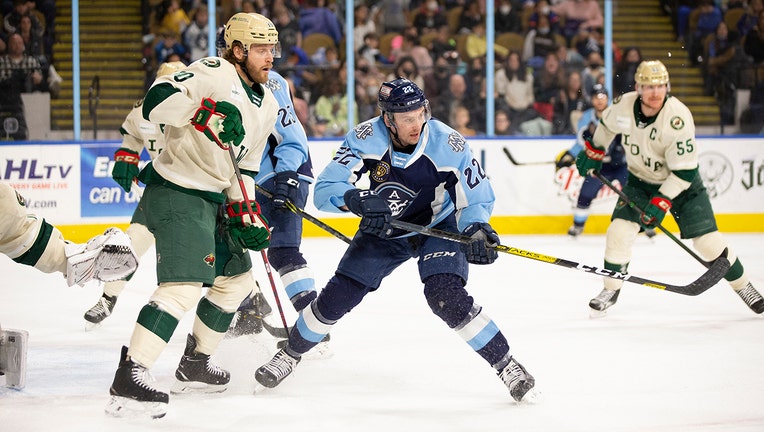 Nearly 5,000 kids were on hand for the Baird/UW-Milwaukee School Day Game at UW-Milwaukee Panther Arena.

With the game tied at two after regulation, Davies took collected a puck along the boards mid-way into the Iowa zone. He carried it up ice through the neutral zone and split a pair of Iowa players before patiently waiting out Wild goalie Zane McIntyre to be out of position – gently lifting the puck over his extended pad.

The goal was Davies fourth of the season and his first career game-winner.

One game after getting career AHL goal 200, it didn’t take Schneider long to pick up number 201 as he put the Admirals up 1-0 at 1:57 of the opening frame. Stationed in front of the net, Schneider redirected a Dylan Blujus shot from the point and through the legs of Iowa goalie Zane McIntyre.

The score stayed that way until mid-way through the third when the Wild struck twice in just under three minutes to grab a 2-1 lead. Nolan Stevens scored the first, firing a shot from the half-wall that snuck through traffic and over the shoulder of a screened Connor Ingram. That was followed by Turner Ottenbreit’s third of the season at 13:38, giving Iowa their first lead of the game.

The Admirals tied the score on Schneider’s second of the day 6:32 into the final frame. With the team on their sixth power-play of the game, the Admirals' captain was posted up in front of the net and collected the rebound off a Matt Donovan shot and swept it by McIntyre to knot the score at 2-2.

The two teams couldn’t score the rest of the way, setting the stage for Davies heroics.

Connor Ingram stopped 30 shots to earn his 23rd win of the season, which is tied for the most in the AHL. Tommy Novak dished out a pair of assists and now show six apples in his past three games.

The Admirals conclude their season-long seven-game homestand with a pair of games this weekend beginning on Friday night at 7 p.m. when they play host the Rockford IceHogs.

Red Bull Flugtag is coming to Milwaukee's Veterans Park on July 16. Teams will compete to build and take flight in handcrafted aircrafts.